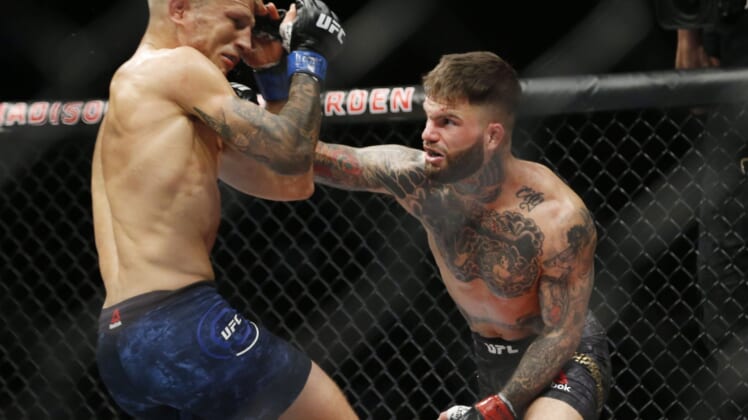 MMA in Las Vegas, baby. It’s a beautiful thing. The co-main event at UFC 250 between Raphael Assuncao and Cody Garbrandt should be, too. With a chance to fight their way to a title bout in the bantamweight division due to the shocking retirement of Henry Cejudo, these two should be extra motivated.

Fans can watch this fight, and the rest of the main card at UFC 250, on ESPN+ starting at 10 p.m. ET on Saturday, June 6. Here, we preview the bout, along with the latest odds and predictions.

Garbrandt, a former champ, is slightly favored to win this fight Saturday night. The fact that he is favored despite losing three straight should tell you all you need to know about the quality of both fighters in this bout.

Per Bovada, here are the latest odds for Raphael Assuncao vs. Cody Garbrandt:

Cody Garbrandt: ‘No Love’ looking for first win since 2016

Back on December 30 of 2016, Garbrandt won the UFC Bantamweight title belt with a Fight of the Night performance, beating Dominick Cruz. He was known as a knockout artist, winning nine of his first 11 fights by way of knockout. Ever since then, it’s been all downhill for the 28-year-old.

Garbrandt had been KO’d in the first or second round of each of his last three fights. Thanks to his 11-0 record before this latest stretch of bad luck, Garbrandt is still ranked No. 9 in the division. But he’ll have to show up big time to remain in the top-10 after UFC 250.

Though Assuncao may be seen as a bit of a has-been in the UFC world, at the age of 37, he was absolutely dominant for a long stretch, going 11-1 from 2011-18. A Muay Thai and Brazilian Jiu-Jitsu expert, he has won 37% of his fights due to submission victories.

The past two times Assuncao has stepped into the Octagon, he’s been defeated. He was choked out by Marlon Moraes last February, then lost with a unanimous decision against Cory Sandhagen last August at UFC 241. However, with a 27-7 record since 2004, his experience and grappling skill make him a dangerous foe.

Raphael Assuncao vs. Cody Garbrandt: Notable quotes ahead of UFC 250

Discussing his losing streak, Garbrandt recently made it clear he’s ready to get back on top of the division.

“When I’m on, no one in the world can beat me,” Garbrandt said, per MMA Fighting. “I truly believe I’ve corrected a lot of my errors that I needed to correct. When I’m at peace with myself, I can cause a lot of chaos inside that octagon because I know that my life is good, it’s in order and I can let that savagery out in the octagon and that’s what I’m prepared to do.”

He also said he’s “battled my demons” and is “here to take the throne again.”

As for Assuncao, he admitted he has “a little bit of a chip” on his shoulder since he’s never had the opportunity to fight for a title, per UFC.com, “but I feel like if I keep connecting the dots, it’s going to come,” he said.

The 37-year-old also said that he thinks Garbrandt got his chance to land the title a bit hastily.

“I do think he was rushed to the top because of a couple good performances, but I’m not hating,” Assuncao said of the former champion. “He took advantage of an opportunity, made some cash, and became the champion. Nice! Cool!”

This fight could be the last chance either Assuncao or Garbrandt gets to contend for a UFC title. If Garbrandt were to lose a fourth straight fight, he’d likely be done altogether. We’re betting that he’s learned from his losses and that he comes out a bit more cautious than he has in recent bouts, looking for his prime chance to strike.