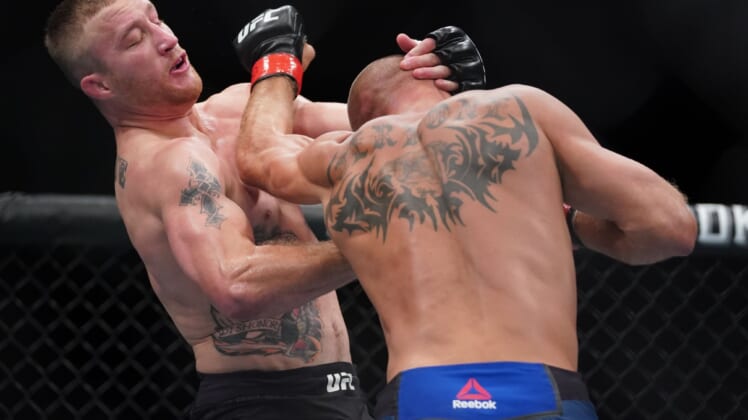 After postponing UFC 249 in April, MMA fans will be getting what they’ve desperately waited for on Saturday with UFC 249’s main event. A slate that will feature some incredible bouts headlined by some of the top fighters in the world will prove to be must-see action.

There are plenty of fans looking forward to some of Saturday’s biggest fights on the main stage. From Greg Hardy vs. Yorgan De Castro to Francis Ngannou vs. Jairzinho Rozenstruik, the bouts will feature plenty of blood, bone-crushing punches and a few knockouts.

Of course, UFC fans can do even more than just watch Saturday’s main event. As the latest odds from SportsBetting.ag show, there are plenty of incredible bets worth getting action on before Saturday. Let’s take a look at some of the top wagers for UFC 249’s main event.

There are few things UFC fans more than a bloody battle and the first fighter to draw blood from his opponent always draws some excitement. UFC 249’s main card event will start with Ferguson facing Gaethje and the line is wide open for which fighter will get the first big strike.

Will Gaethje/Ferguson winner say “corona” or “COVID” in post-fight interview?

It’s nice to draw first blood, but you don’t get the lightweight interim title for making your opponent bleed. It’s all about who comes out victorious, especially with even more fans watching during the pandemic. After already having the first flight delayed because of the coronavirus, UFC fans can also bet on if the winner will drop the iconic word after his victory.

Will Bruce Buffer wear a mask in the octagon during the main card?

The moment Buffer’s iconic voice is heard will be a delight for UFC fans and they could even get a little money from his appearance. If Buffer follows safety protocols and wears a mask in the ring, there’s a great opportunity for people to cash in.

Winning a UFC fight is great, but nothing beats doing it in the first round. Of course, that’s not easy to do when facing some of the best MMA fighters in the world. UFC fans can wager on the quickest fight to finish and as we predicted in our UFC 249 preview, we’ve got our eye on Ngannou.