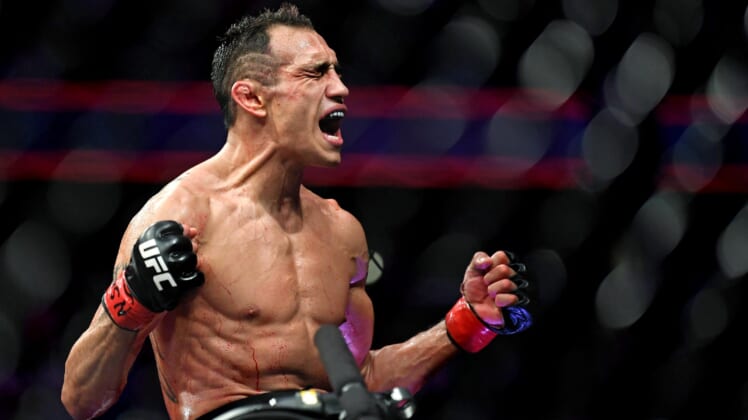 The Lightweight Interim Title Bout will cap off what promises to be a fun UFC 249 on Saturday night. It pits the No. 1-ranked Tony Ferguson against top contender Justin Gaethje. Fans can watch this fight, and the rest of the main card at UFC 249, on ESPN+ starting at 10 p.m. ET on Saturday, May 9. Here, we preview the bout, along with the latest odds and predictions.

It goes without saying that this promises to be one of the most competitive bouts come Saturday evening. It’s also no surprise that Ferguson finds himself as a slight favorite after having come out on top in his past 13 fights.

Though, the odds show that Gaethje will at the very least put up a good fight in this one. It’s what sports fans have been asking for with all other major events canceled or postponed during the ongoing pandemic.

As noted above, this 36-year-old California native has been absolutely dominating in recent years. He’s coming off a knockout win over Donald Cerrone in UFC 238 last June. In fact, Ferguson has taken out big names such as Anthony Pettis and Kevin Lee recently.

“El Cucuy,” as he is known, has won 81% of his fights by either knockout or submission. That’s an alarmingly high rate for his opponent. This is magnified by the fact that only one of Ferguson’s past six fights (all wins) have ended in a decision.

Boasting a career record of 21-2 and having won his past three matches, this Arizona native heads into UFC 249 also on a roll. Though, it must be noted that he’s failed when he last took center stage in a big bout. Gaethje lost to the better known Eddie Alvarez in UFC 218 back in December of 2017. It was the fight of the night. He also followed that up with a surprising loss to Dustin Poirier in a UFC on Fox match the following April.

The good news here is that 86% of Gaethje’s wins have come via knockout. His most recent match included a knockout of the above-mentioned Cerrone. That’s something Gaethje and Ferguson have in common.

Tony Ferguson vs. Justin Gaethje: Notable quotes ahead of UFC 249

Gaethje had a pretty startling revelation ahead of UFC 249 when he noted he hopes that Ferguson breaks his nose during the title match.

“I need my nose broken. I haven’t been able to breath through my nose for like 12 years since wrestling,” Gaethje said. “So hopefully one of those elbows cracks my nose, the UFC has to pay for that s**t, and it’s an exciting a** fight.”

That’s something you don’t hear every day from a fighter. As for Ferguson, he took the pre-fight time to actually troll another big-name rival.

Tell us how you really feel. It does not seem like Ferguson is downplaying his match with Gaethje. That’s a good thing given he’s in for a heck of a fight.

Two knockout artists going up against one another. Both on rolls heading into Saturday night. The splits suggest a close bout that should at least make it out of Round 1. All but one of Ferguson’s past 10 fights have gone more than one round.

I will go with the favorite to submit Gaethje in Round 4 Saturday night. He’s just been on too much of a roll in recent years, and offers a new type of matchup. Ferguson will claim the title and not look back.

Prediction: Ferguson submits Gaethje in Round 4.