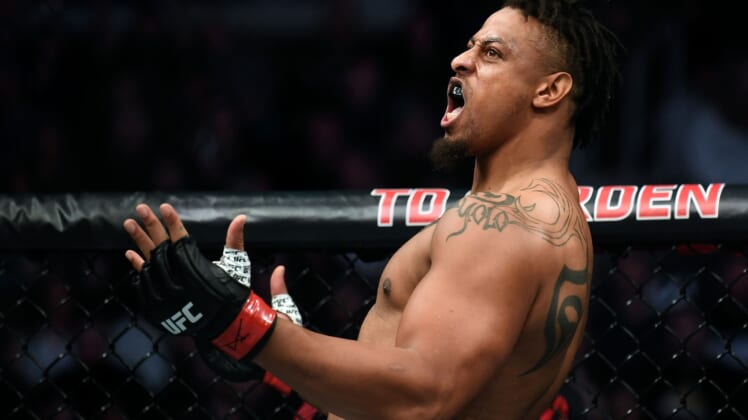 Greg Hardy and Yorgan De Castro will kick off the main card at UFC 249 Saturday and the two heavyweights should put on a show. The main card starts at 10 p.m. ET and will be broadcast on ESPN+. Here, we preview the bout, along with the latest odds and predictions.

Of the two fighters, Greg Hardy is more recognizable to the average fan. The former NFL star defensive lineman has become a ferocious fighter in short order.

So, it’s not a shock that Hardy is favored to beat De Castro as the main card of UFC 249 opens with these heavyweights.

De Castro shouldn’t be discounted as an underdog, however. He’s undefeated as a UFC fighter and is a knockout specialist in his own right.

Hardy (5-2-1) went into his last fight against Alexander Volkov on a high note. The “Prince of War” had knocked two opponents in a row before his unanimous decision over Ben Sosoli was overturned (he used an inhaler in between rounds) and turned into a no contest.

Then, at UFC Fight Night: Magomedsharipov vs. Kattar in Moscow, he ran into a fighter that had superior technical skill. The result was a loss by unanimous decision as Volkov schooled him from start to finish.

This UFC 249 matchup against De Castro will be a different type of battle, though. And it’s one Hardy can certainly win.

Coming into UFC 249, De Castro has a 6-0 record as a pro MMA fighter. Five of his wins have come via knockout, and he is going to put Hardy to the test in a big way.

His last victory against Justin Tafa was spectacular. Tafa was charging in, looking for a big hit of his own. Then De Castro delivered a savage counter with his right hand, dropping Tafa like a sack of potatoes.

If Hardy isn’t on his best behavior, he’ll get the same treatment on Saturday.

There hasn’t been too much pre-match trash talk between these two heavyweight fighters. They have both abstained from any fighting words on social media.

What we do know is that De Castro is loving the underdog role.

As for Hardy, the dude just wants to fight. Any time, anywhere.

There is a distinct size advantage for Hardy in this UFC 249 main card bout. At 6-foot-5, he stands four inches taller than De Castro. And with a 80-inch reach, he has six inches on his opponent.

Hardy has also faced more formidable opponents in his short MMA career than De Castro has. And while he did lose his last fight, that experience could have been tremendously positive for his overall development.

With all that in mind, it’s easy to understand why Hardy is heavily favored to win at UFC 249.

All that being said, De Castro has raw power you cannot teach. And while he doesn’t look it, the big man is exceptionally quick with his counter-punches.

Prediction: Yorgan De Castro wins with a knockout in Round 2.