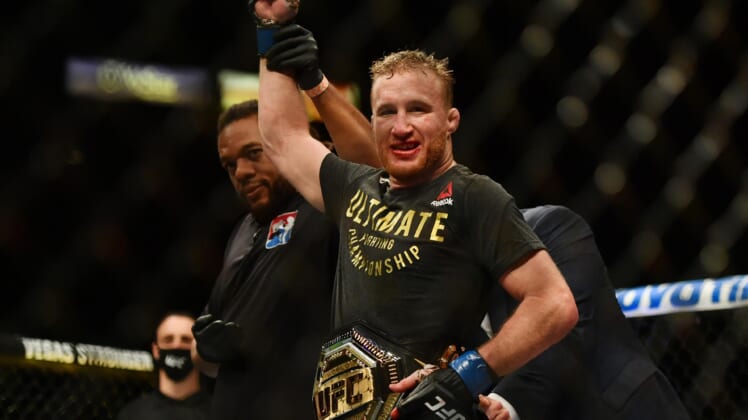 The Ultimate Fighting Championship is back and made its return from a seven-week break.

UFC 249 was hands down one of the most stacked cards in MMA history and featured an Interim Lightweight Championship match between Tony Ferguson and Justin Gaethje. This matchup has all the makings for Fight of The Year and featured two elite lightweight fighters who never seem to have a dull fight. Let’s check out the full main card analysis:

I had high hopes that this could be a heavy-hitting fight. This was a very disappointing opening contest and showed how much both of these fighters need to improve if they wish to become high-level MMA fighters. De Castro came out swinging leather hard in the opening round but apparently  injured his foot early on. It changed the pace of the fight and he was reluctant to engage and use leg kicks due to his apparent injury. De Castro’s lack of engagement allowed his opponent, the disgraced former NFL player Greg Hardy, to capitalize and out strike him easily and coast to an easy decision victory.

De Castro is in awful physical shape and looked terrible after the first few minutes of the fight. Greg Hardy proved he can beat an out of shape fighter and coast to an easy victory. Neither fighter should be on a main card UFC fight any time soon.

The second round was equally as ferocious, and each fighter trade their hardest strikes at will. With a more refined striking approach Kattar used a vicious standing elbow to drop Stephens and followed up with several vicious strikes to knock out Jeremy Stephens unconscious. It was a violent ending to a great fight.

Calvin Kattar is for real folks. Not only can Kattar withstand brutal strikes but he hits with extreme precision and power. The ending was vicious, and the referee should have stopped the contest when Stephens got dropped by Kattar’s standing elbow. Errant officiating led to a huge gash on Stephens forehead and multiple unnecessary punches. Remember Calvin Kattar’s name because he has a bright future.

An important lesson was learned tonight for all UFC heavyweight contenders to pay close attention to: DO NOT call out Francis Ngannou! You will not like what the results will be as Ngannou has scary power!!!!!!!

Many people question if Dominick Cruz could come back and perform at a high level once again after injuries suspended his career. Make no mistake, Dominick Cruz looked very good coming off a nearly four-year retirement. Henry Cejudo looked tremendous yet again and was a step ahead of the former bantamweight champion throughout the fast paced two rounds.

An accidental head butt opened a cut on Cejudo’s forehead and he immediately landed a devastating knee to drop Cruz late in the second round ending the fight .While Cruz and the announcers contested the stoppage, the referee’s decision is final and Cejudo retains his title again. After the fight, Cejudo announced his retirement from fighting. Wow!!!!!

Cruz looked very good and was finding his rhythm. The stoppage was premature in my eyes, but he will be back soon contending. Cejudo looked great and was a step faster than Cruz. I would be blown away if his retirement is anything more than a contract negotiation tactic.

From the start of this fight, Justin Gaethje made it clear he was throwing every strike as hard as he possibly could. The opening two rounds saw Gaethje land his hardest shots and Ferguson ate each one. Ferguson is such a smart fighter and caught Gaethje at the end of Round 2 and never wavered from his game plan. Round 3 saw both fighters trade strikes at will and a huge cut opened under Fergusons eye.

With his Ferguson’s eye closing due to repetitive punches throughout Round 3, Gaethje timed his strikes more and started beating up Ferguson badly the entire round. Gaethje spent the next two rounds destroying Ferguson on the fight and forced the referee to stop it late in Round 5. Congrats to the new Interim UFC Light Heavyweight Champion Justin Gaethje. What a fight folks!!!!!