UConn clamps down on Boston College 13-3 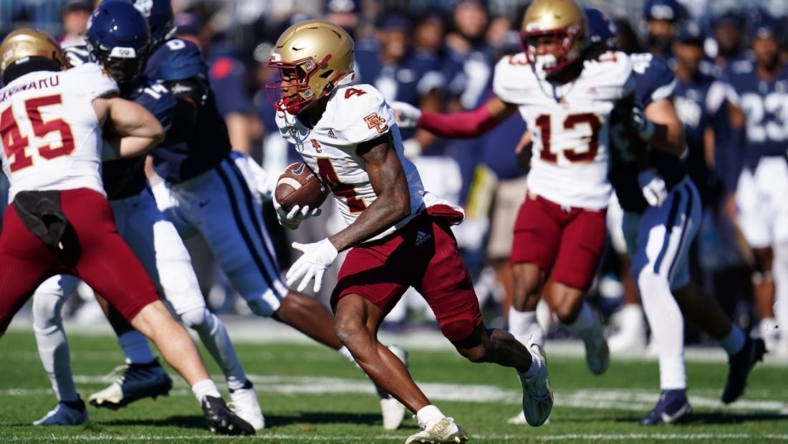 Freshman quarterback Zion Turner threw for a season-high 173 yards and a touchdown as UConn held off visiting Boston College in a 13-3 victory Saturday at East Hartford, Conn.

Boston College quarterback Phil Jurkovec threw for 155 yards but was intercepted twice, including one in the end zone late in the second quarter. Jurkovec, who absorbed three of UConn’s four sacks, also rushed 14 times for 29 yards before leaving with an apparent knee injury in the third quarter.

In a mistake-filled game, the Eagles (2-6) also fumbled away late chances.

Boston College trailed 10-3 in the fourth quarter when backup quarterback Emmett Morehead found Jeremiah Franklin for a short completion, but Franklin fumbled, and the Huskies’ Jackson Mitchell recovered at the Boston College 32.

On Boston College’s next possession, Mitchell picked off Morehead, giving the Huskies possession at their own 32.

After forcing UConn to punt, the Eagles gave the ball right back to the Huskies. Star BC wide receiver Zay Flowers, who dropped a possible touchdown pass early in the fourth quarter and had just two catches for 35 yards, muffed the punt, with Mitchell making the recovery. Mitchell also had a sack for UConn and Pryce Yates had two more.

Aaron Turner had 70 yards on four catches for the Huskies. The Eagles’ Patrick Garwo amassed 89 yards receiving and 13 rushing.

On the game’s third play from scrimmage, Turner hit Justin Joly down the right sideline, and one missed tackle by Boston College was all Joly needed to finish the 62-yard scoring play. Ruelas’ extra point made it 7-0 just 65 seconds into the game.

The Eagles then gambled on their first possession, going for a first down on fourth-and-1 at their own 34, but Jurkovec was held to no gain.

The Huskies then moved to a first-and-goal at the Boston College 5-yard line, but a fumbled snap cost them 20 yards, and they settled for Ruelas’ 31-yard field goal and a 10-0 lead.

The Eagles’ only points came on Connor Lytton’s 19-yard field goal with 9:57 left in the first half. He missed a 43-yard attempt in the closing seconds of the game.