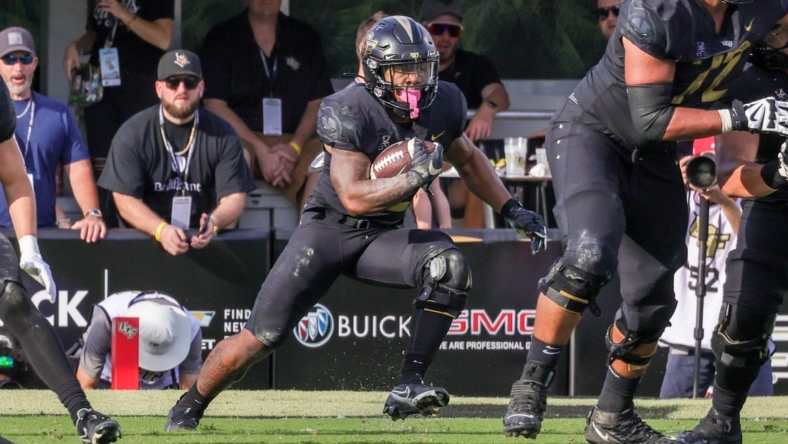 The lead changed hands three times in the fourth quarter and Harvey put the Knights ahead (6-2, 3-1 AAC) again when he impressively converted a 2-and-7.

Harvey ran up the middle, eluded three tackles and easily scored to give UCF a 24-21 lead. After the Knights easily made the extra point, their defense sealed it as KD McDaniel forced a fumble that pushed Cincinnati back to its own 5. Jeremiah Jean-Baptiste then broke up a pass by Ben Bryant on 3rd-and-30, and Bryant’s 4th-and-30 pass went for only 9 yards.

Harvey’s TD capped a big performance on the ground for UCF, which entered the game ranked sixth nationally in rushing. The Knights outgained Cincinnati by a commanding 258-35 margin, enabling them to secure 30 first downs and control possession for 37:05.

Harvey led all rushers with 84 yards on 18 attempts, including a 26-yard TD that gave UCF a 10-0 lead through the opening quarter.

UCF lost starting quarterback John Rhys-Plumlee midway through the second quarter. Plumlee absorbed a hit to the head by Cincinnati’s Arquon Bush with about seven minutes left and stumbled walking back to the huddle.

Before UCF scored twice in the fourth, the Bearcats rallied from a 12-6 deficit to take a 13-12 lead on Josh Whyle’s 14-yard TD catch with seven seconds left in the third.

After UCF took a 10-0 lead late in the first, Cincinnati settled for two 33-yard field goals by Ryan Coe to get within 10-6 by halftime. After the Bearcats recovered a fumble by Bowser midway through the third, Bryant was sacked in the end zone for a safety with 7:52 left.