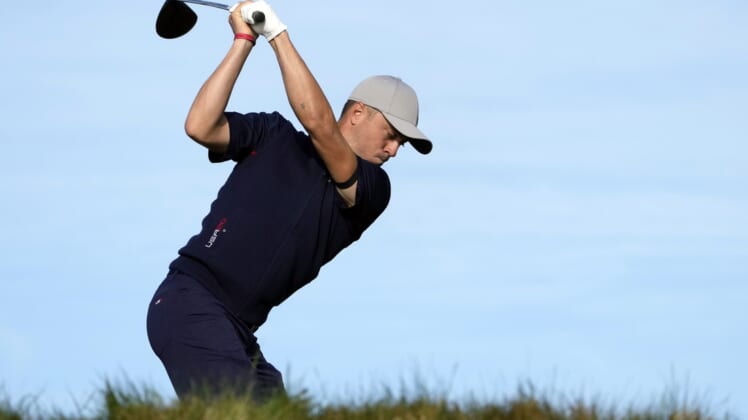 The United States jumped out to a 3-1 lead Friday after the opening foursome matches of the Ryder Cup at Whistling Straits and will look to add to that lead in afternoon play.

Registering wins for the Americans were Dustin Johnson and Collin Morikawa, who defeated Paul Casey and Viktor Hovland 3 and 2; Brooks Koepka and Daniel Berger, who topped Lee Westwood and Matt Fitzpatrick 2 and 1; and the team of Ryder Cup rookies Patrick Cantlay and Xander Schauffele, victors over Rory McIlroy and Ian Poulter 5 and 3.

The Europeans got on the board when Spaniards Sergio Garcia and Jon Rahm defeated Justin Thomas and Jordan Spieth 3 and 1. It was a significant win for Team Europe but also a record-setting one for Garcia, who tied Nick Faldo for a record 23 Ryder Cup wins and extended his record for career points to 26.5.

In Paris three years ago, the Americans led 3-1 after the morning session and hadn’t trailed after the opening round since 2006, so Team USA can’t let up if it wants a win on the picturesque course on the shores of Lake Michigan in Kohler, Wis.

They’ll be counting on their six rookies to mix with the veteran to deliver the knockout punch.

That’s just what the team of Cantlay and Schauffele did Friday, and even when they went 5 up on McIlroy and Poulter after five holes, Schauffele said they approached the game as if it were all tied.

“We’re all square,” he said of their attitude. “Keep pushing.”

Cantlay and Schauffele said they were able to calm their nerves because they relied on each other.

“First and foremost, we’re really good friends,” Cantlay said. “And then, obviously, X is a really great partner for anybody. He’s so solid, plays great and has one of the best attitudes out here.”

Even in a losing effort, Spieth had the shot of the day.

On the 17th hole, with the ball wedged into the side of a hill. Spieth struck the ball so that it traveled upward, and then landed feet from the hole. Only the reaction of the partisan American crowd let him know his shot was a good one. After hitting the ball, his momentum sent him backward, down the hill and just short of the lake.

Captains Steve Stricker and Padraig Harrington split up their teams for the afternoon fourball session, where unlike the morning session, each golfer plays his own ball. The afternoon pairings:

–Johnson and Schauffele vs. Casey and Bernd Weisberger
–Bryson DeChambeau and Scottie Scheffler vs. Rahm and Tyrrell Hatton
–Tony Finau and Harris English vs. McIlroy and Shane Lowry
–Thomas and Cantlay vs. Tommy Fleetwood and Hovland