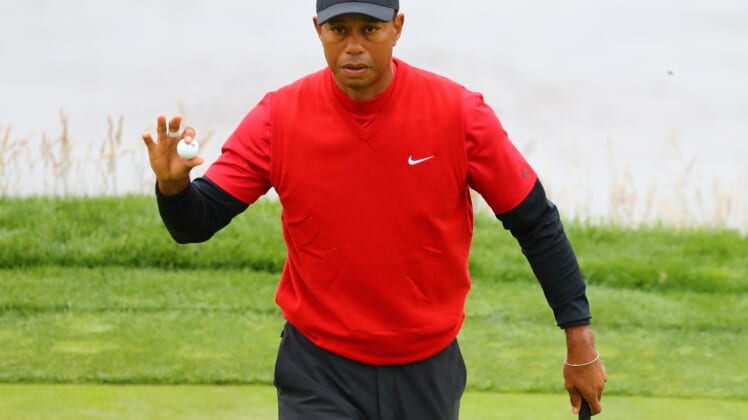 The 2019 U.S. Open at Pebble Beach is complete. For the first time in his career, Gary Woodland is a major champion.

While Woodland is the only champion from the week, we can’t say that he’s the only winner. Brooks Koepka, the two-time reigning U.S. Open champion, fought awfully hard to make it three in a row. Meanwhile, an amateur record that was set nearly six decades ago by Jack Nicklaus was broken.

On the other side, Phil Mickelson couldn’t get it going in his bid for the Career Grand Slam. Tiger Woods had plenty of highlights, but almost as many lowlights.

Looking back on the week that was at Pebble Beach, these were the top winners and losers from the 2019 U.S. Open.

Woodland carried the 54-hole lead into Sunday. That assignment earned him a Sunday pairing with Justin Rose, a former World No. 1 and a past U.S. Open champ. In the group ahead was Brooks Koepka, the current No. 1 and the two-time defending U.S. Open (and PGA) Champion. Woodland answered the call. He didn’t panic when Koepka started out on fire. Woodland simply answered, making birdie on two of the first three holes. When the shots started to get a little more errant, Woodland’s short game came through. The overall performance was simply outstanding. As a result, Woodland is a very deserving U.S. Open champ.

This U.S. Open should have played out well for Mickelson, who has five wins at Pebble Beach. More importantly, low scores really suit aggressive players like Lefty. When he turned on Saturday, Mickelson was at two-under. Unfortunately, rather than play himself into contention, he was five-over on the back, which included a triple on the 18th. Mickelson turned 49 on Sunday. He’s already older than any major winner and four years older than any U.S. Open champ. If he couldn’t even be in the hunt at Pebble, it’s hard to imagine things will be any better in future U.S. Opens.

While Koepka didn’t pull of the U.S. Open three-peat, he was absolutely brilliant. He applied early pressure to Woodland on Sunday. Even when some of Koepka’s shots started to get a little more crooked, he stayed in the mix with a great short game and putter, making only two bogeys. Three U.S. Open titles in a row would have been arguably the greatest achievement in golf history. Koepka didn’t quite do that. He certainly made Woodland earn it, though. Also, a we’d call two wins and a runner-up a pretty spectacular three-year run.

McIlroy entered Sunday five back of Woodland. So, he needed to have a strong start. He just couldn’t find his form. McIlroy made a double and two other bogeys on the front nine. What’s really unfortunate for McIlroy is that in other ways, he did what he had to do. McIlroy also made three birdies on the front nine. But with the mistakes, he turned at one-over for the day. And while his T-8 finish wasn’t bad by any means, front-nine inconsistencies kept McIlroy from being a real factor down the stretch.

The USGA has taken a lot of well earned criticism for the way it’s handled recent U.S. Opens. This week, though, the USGA did an amazing job. Pebble Beach was in great shape. When the scores in the early rounds came in low, the USGA didn’t overreact by drying the course (particularly the greens) out. We hope that this model is followed next year at Winged Foot. Despite the low scores, this was still a good test of golf. The bad shots were punished and the good shots were rewarded. Realistically, that’s all we can ask for from a U.S. Open setup.

Loser: Justin Rose’s swing lets him down on Sunday

Heading into the week, it would have been hard to be too down on a T-3 finish. The way it materialized, though, was a real disappointment for Rose. He entered Sunday one shot back. It was a great opportunity to apply pressure to Woodland, who had never won a major. Instead, Rose shot a three-over 74 to finish five behind the champ on the day and six for the tournament. Frankly, the only reason he was even that close was because of his putter. Tee-to-green, Rose played well below what we’d expect from a former World No. 1 and past U.S. Open champ.

Hovland will turn pro after this week. It’s safe to say that he finished his amateur career in style. Just like at the Masters, Hovland earned low amateur honors, finishing the week in 282 shots, or four-under. Both marks broke the previous scoring record for an amateur. The previous record holder? Jack Nicklaus in 1960. Hovland’s finishing score would have been good enough to win three of the previous U.S. Opens contested at Pebble Beach. Unfortunately, that wasn’t the case this year. All things considered, though, breaking a record held by Nicklaus is a pretty good consolation prize.

Tiger made 15 birdies on the week. For comparison’s sake, Woodland made 17 while Koepka made 16. So, why wasn’t Tiger a heck of a lot closer? Quite simply, he couldn’t get out of his own way. In addition to the 15 birdies, Woods made 11 bogeys and a double. In other U.S. Opens, the two-under score would be good enough to contend, or even win. At Pebble this weekend, though, there were low scores to be had. Tiger definitely had enough good moments to be in the mix. Unfortunately, the bad moments were just too common for Tiger to have a chance at a fourth U.S. Open.