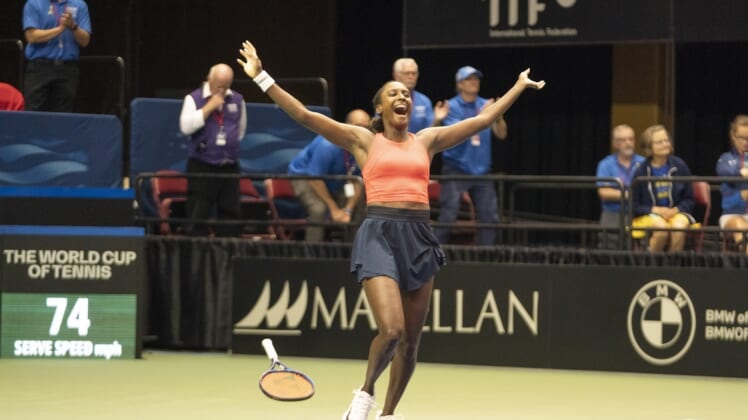 Jessica Pegula and Asia Muhammad teamed up for a 7-6 (5), 6-3 doubles victory over Dayana Yastremska and Lyudmyla Kichenok on Saturday to give the United States a 3-2 victory over Ukraine in a Billie Jean Cup qualifier in Asheville, N.C.

The victory boosted the Americans into the finals, which will be held in November at a still-to-be-determined site.

The U.S. led 2-0 entering the day before Ukraine rallied with two singles wins. Yastremska knocked off Pegula 6-3, 6-4 and Katarina Zavatska evened the match with a 6-3, 6-4 victory over Shelby Rogers.

But Pegula and Muhammad were able to win a tiebreaker in the first set of doubles play before posting a 5-0 edge in aces in the second set while clinching the victory.

Also advancing to the finals on Saturday were Italy (3-1 over France), Czech Republic (3-2 over Great Britain), Kazakhstan (3-1 over Germany), Spain (4-0 over Netherlands) and Poland (4-0 over Romania).

Switzerland, which lost in the 2021 finals, automatically qualified for the championship round. Defending champion Russia and Belarus are banned from the competition after the invasion of Ukraine.