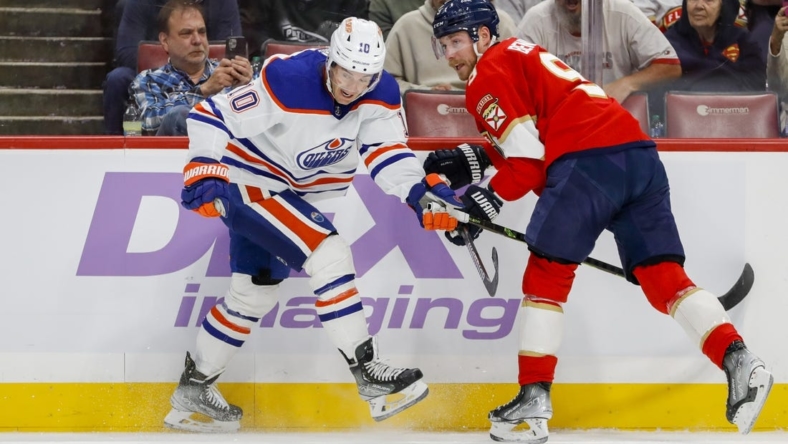 Defenseman Tyson Barrie scored twice to fuel the visiting Edmonton Oilers to a 4-2 victory over the Florida Panthers on Saturday in Sunrise, Fla.

Warren Foegele scored the eventual game-winning goal in the third period and Stuart Skinner made 40 saves for his third win of the season.

Skinner’s performance was a welcome development for the Oilers, who have struggled to keep pucks out of the net lately. Starting goalie Jack Campbell was blitzed for seven goals in his last outing and has a .873 save percentage in his first season with the Oilers after signing as a free agent this summer.

Sam Bennett scored twice and Spencer Knight made 27 saves for the Panthers.

Barrie scored his first goal on a one-timer from the point with 8:11 remaining in the second period. Mattias Janmark protected the puck behind the net before working it to Ryan McLeod, who teed up Barrie.

The assist was Janmark’s first point as an Oiler after getting recalled from the American Hockey League earlier this week.

Florida tied the game at 1-1 early in the third period on Bennett’s fourth goal of the season. Bennett cleaned up a rebound on the power play after an initial point shot by Gustav Forsling.

Barrie’s second goal gave Edmonton a 2-1 lead at 6:53 of the third period. Barrie teed up another slapshot from the slot that beat Knight on the stick side for a power-play goal.

Foegele made it 3-1 at 15:07 of the third period when he fired a wrist shot past Knight after Leon Draisatl forced a turnover in the Panthers’ defensive zone.

Foegele’s goal was necessary insurance after Bennett scored his second goal of the night less than a minute later.

Ryan Nugent-Hopkins added an empty-net goal to make it 4-2. Captain Connor McDavid had the primary assist, his 17th of the season.

It was the end of a three-game Eastern Conference road trip for the Oilers, who return home to host the Los Angeles Kings on Wednesday.

Florida is in the midst of a five-game homestand. The Panthers host the Washington Capitals on Tuesday.