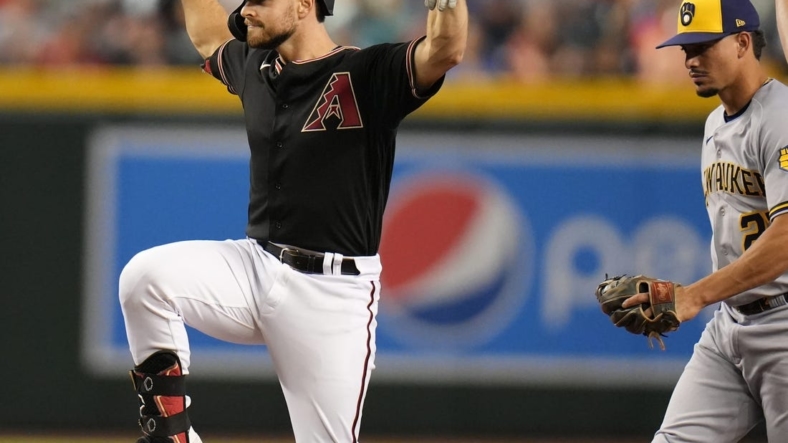 Tyrone Taylor hit a pair of homers — including a two-run blast in the top of the 10th inning — as the Milwaukee Brewers rallied to beat the Arizona Diamondbacks 8-6 on Saturday in Phoenix.

After dropping the first two games of the four-game set, Milwaukee trailed 6-5 with one out in the ninth inning before pinch hitter Rowdy Tellez deposited a solo homer into the center field seats against Ian Kennedy.

Taylor had three hits and scored three runs, and he capped the comeback with his leadoff homer in the 10th against Joe Mantiply (2-5), scoring automatic runner Esteury Ruiz.

Devin Williams (6-3) pitched a scoreless ninth inning for the win, and Taylor Rogers retired the Diamondbacks in order in the 10th with two strikeouts for his 30th save in 37 opportunities.

Daulton Varsho homered while Cooper Hummel, Josh Rojas and Geraldo Perdomo each had two hits for the Diamondbacks, who led 6-4 after six innings.

Milwaukee pulled within 6-5 on Andrew McCutchen’s RBI single in the eighth against Reyes Moronta, the fourth of seven Arizona relievers.

Willy Adames added two hits for the Brewers, who remained 7 1/2 games behind the first-place St. Louis Cardinals in the NL Central and moved within 2 1/2 games of the third and final wild-card spot.

Corbin Carroll gave Arizona a 1-0 lead with his two-out RBI single in the first against Corbin Burnes. Victor Caratini put the Brewers ahead in the top of the second against Madison Bumgarner with a two-out, two-run double.

The Diamondbacks pulled even in the bottom half when Hummel doubled and later scored on Varsho’s sacrifice fly.

Milwaukee pushed a run across with two outs in the fifth when Keston Hiura’s grounder was mishandled by second baseman Rojas, allowing Adames to score from third.

Varsho tied the game with a solo homer, his 19th home run of the season, in the bottom of the inning against Burnes, who yielded five runs on seven hits with three walks and five strikeouts in 5 2/3 innings.

Arizona moved ahead 6-4 after scoring three runs in the bottom of the sixth. After Hummel doubled in a run with two outs, Brad Boxberger replaced Burnes and allowed Geraldo Perdomo’s RBI single. Perdomo then stole second and scored on Rojas’ single.