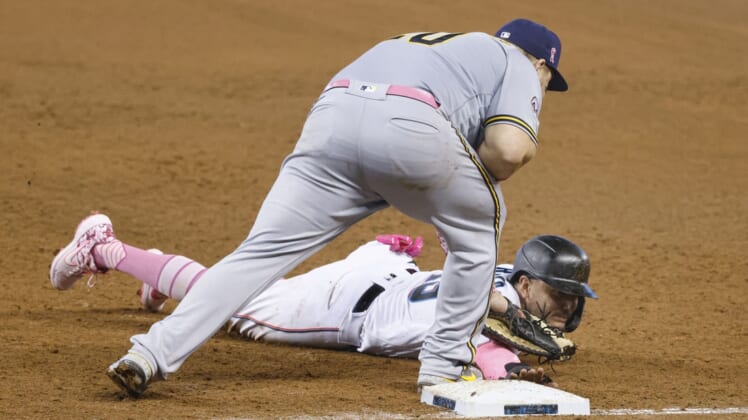 Tyrone Taylor hit a two-out, RBI single in the top of the 10th inning, leading the Milwaukee Brewers to a 2-1 win over the host Miami Marlins on Sunday afternoon.

The Brewers, who snapped a six-game losing streak on Saturday, won their second straight game, taking the series.

Reliever Anthony Bass (1-3) took the loss as the teams combined to use 11 pitchers, including seven by Milwaukee.

Marlins center fielder Lewis Brinson, who returned after missing two games due to a finger injury, went 3-for-4 with a solo home run. Brinson made his major-league debut with the Brewers in 2017, before they included him as part of the January 2018 trade that sent Christian Yelich from Miami to Milwaukee.

Milwaukee’s Brett Anderson – in his first game back from the injured list – lasted just three innings, allowing two hits, one walk and no runs.

The Brewers opened the scoring in the fourth on Vogelbach’s line-drive homer, which he pulled to right with an exit velocity of 114 mph. The shot got out in 3.5 seconds and had a peak elevation of 48 feet. For perspective, teammate Avisail Garcia’s homer on Saturday had a hang time of 6.8 seconds and peak elevation of 157 feet.

Miami’s offense was stuck early as two runners were picked off first base – Corey Dickerson in the first inning and Miguel Rojas in the fifth – spoiling potential rallies.

But in the seventh, Brinson led off by slugging a 1-1 pitch over the wall in center. His 412-foot shot off of reliever J.P. Feyereisen tied the score at 1.

It was the first homer allowed this year in 18 appearances by Feyereisen.

Milwaukee took its 2-1 lead in the 10th as Taylor stroked a 0-1 fastball to left-center.

Rasmussen then worked around a two-walk and ended the game by getting Rojas to ground out to second base.