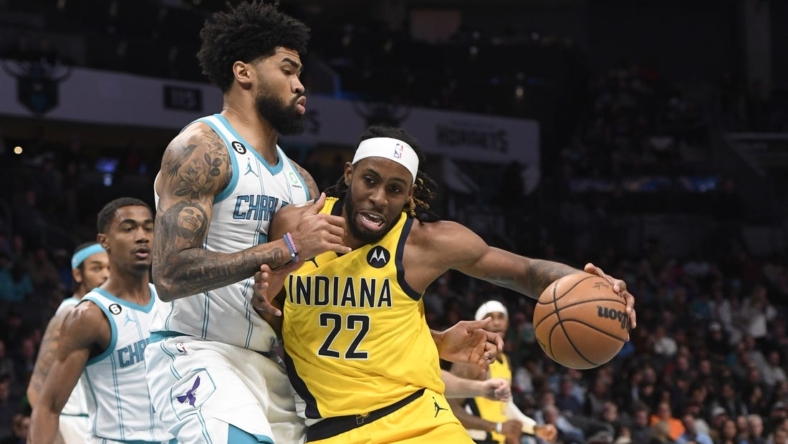 Tyrese Haliburton had 22 points in a duel between two young point guards to help the Indiana Pacers to a 125-113 road victory against the Charlotte Hornets on Wednesday night.

Haliburton also recorded 11 assists and had a role in ruining the season home debut for Charlotte point guard LaMelo Ball.

Indiana’s Myles Turner had big moments in the lane with 20 points and 10 rebounds, and reserve Bennedict Mathurin also had 20 points. Buddy Hield added 19 points, Andrew Nembhard had 13 points and Jalen Smith finished with 11 points to boost Indiana to its sixth triumph in the past eight games.

Ball ended up with 26 points on 10-for-17 shooting from the field, making five of his eight 3-point attempts, to go with six assists. But it wasn’t enough to generate back-to-back victories for the Hornets, who have dropped nine of their past 10 games.

P.J. Washington racked up 24 points for Charlotte, and Kelly Oubre Jr. supplied 17 points (despite 1-for-7 shooting from 3-point range) and 13 rebounds. Terry Rozier had 17 points and eight assists while Mason Plumlee finished with 12 points and 10 rebounds for Charlotte, which was outscored 35-23 in the fourth quarter.

The Hornets made 12 of 32 3-point attempts but were hurt by 17 turnovers. In addition, their defense wasn’t up to the task against an Indiana team that shot 53.7 percent from the field.

There were back-and-forth stretches in the fourth quarter. The Pacers went from up five to down two in less than 2 1/2 minutes.

Then the visitors rattled off eight straight points, beginning with four from Smith.

When Haliburton drained a 3-pointer with 2:32 to play, the Pacers had built a 115-106 lead. That concluded a stretch of 11 points for Indiana in two minutes.

The Hornets held a 13-point lead in the second quarter, but that gap nearly vanished by halftime. Charlotte was up 63-60 at the break after Hield fired in five points in the last 17 seconds.