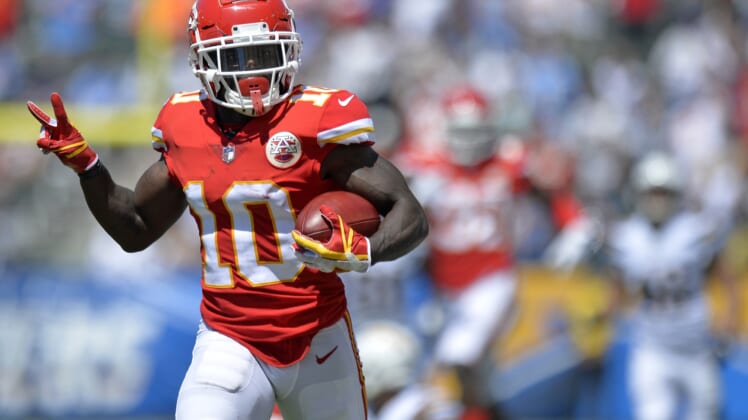 Tyreek Hill is a superfreak when it comes to pure speed. He’s known as Cheetah, and for good reason — once he hits that turbo button nobody’s catching him.

As Bill Belichick and the New England Patriots prepare for an AFC Championship Game battle against the Kansas City Chiefs, they have to figure out a way to stop this guy.

On Tuesday, Belichick was asked if the Patriots can coach for Hill’s speed, and his response was amazing.

Belichick was asked if the Patriots can coach for Tyreek Hill's speed.

"Coach for it? Like, can we make someone that fast?"

The answer to this question, of course, is a resounding no. You cannot coach someone to be as fast as Tyreek Hill.

per Next Gen stats, Antonio Callaway hit a top speed of 21.48 mph on that 47-yard touchdown catch. That's the third fastest top speed reached so far this season, second only to Tyreek Hill, who owns the top two spots

Yeah, Cheetah is fast. You can’t coach that. Belichick knows it. We all know it.

But don’t for a second think that doesn’t mean the grand master doesn’t have a grand plan to keep him from ripping off some huge plays on Sunday when the Pats and Chiefs go toe-to-toe in the middle of an arctic blast at Arrowhead Stadium.