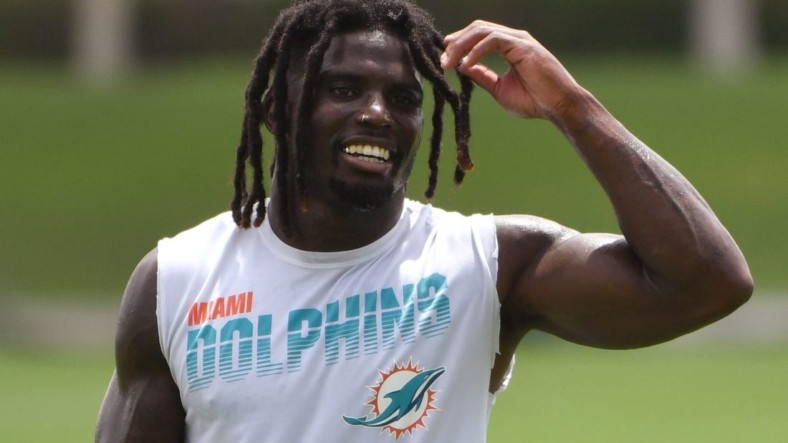 When the Miami Dolphins traded for three-time All-Pro wide receiver Tyreek Hill, and subsequently signed him to a four-year, $120 million extension this offseason, it was abundantly clear that crafting an elite offense was a top priority.

But Hill isn’t the only new weapon that Tua Tagovailoa now has at his disposal, and the third-year quarterback will get his first chance to showcase his new offensive arsenal when the Dolphins open the 2022 season with a clash against the New England Patriots on Sunday at Miami Gardens, Fla.

Hill and Wilson are part of a formidable trio that also will feature Jaylen Waddle, who eclipsed the 1,000-yard mark in his rookie season on 104 receptions.

And there’s a good chance there will be plenty of opportunities to make plays through the air against a Patriots secondary that still needs to establish its identity.

New England saw cornerback J.C. Jackson sign with the Los Angeles Chargers in March after he led the league in passes defensed last season with 23 while nabbing eight interceptions, second-most in the NFL.

To account for the loss, the Patriots signed veterans Malcolm Butler and Terrance Mitchell, but both were released ahead of the cutdown deadline. Mitchell was later signed to the team’s practice squad.

That means Jonathan Jones will be starting on the perimeter, with Jalen Mills on the opposite side. Jones played in just six games (one start) last season, but New England head coach Bill Belichick likes what the 28-year-old brings to the defense.

“Jon’s a very versatile and important guy to our team since he came here in the kicking game and defensively,” Belichick said. “Very professional, works hard, prepares well and brings a high level of toughness, competitiveness and speed to our team.”

While the Patriots might have their hands full with the passing game, they can’t ignore Miami’s ground attack.

McDaniel took over for Brian Flores, who was fired in January.

“I know Week 1 you expect the unexpected, and we’ll get into a rhythm and hopefully that rhythm is drives that are a lot of yards and end in points,” McDaniel said. “And then we’ll go from there, but it’s not something that could ever typecast, I don’t think, because I think that’s short-selling the defensive players and the scheme that we’re going against.”

Wide receiver DeVante Parker will be on the field, but he will have to find his way to a new locker room.

Parker was traded to New England in April after spending the first seven seasons of his career with the Dolphins. He’ll try to help the Patriots secure a rare road win in Miami, where they have lost four of the last five games on their division rival’s home turf.

A good portion of the Patriots’ passing game might end up going through Parker since wide receivers Jakobi Meyers and Ty Montgomery were limited participants in practice on Wednesday.

For the Dolphins, Waddle was one of 11 players limited in Wednesday’s practice due to a quad injury.