New Orleans Saints big-ticket free agent addition Tyran Mathieu seems to be unhappy with his new team, and a pair of recent tweets will have some wondering if he may not be in the starting lineup for the team’s Week 1 matchup against the Atlanta Falcons.

The three-time All-Pro entered the 2022 offseason as one of the best defensive backs on the open market. He also ended up staying on the market far longer than many observers of the sport expected. Eventually, in May he and the Saints came to terms on a three-year contract worth over $28 million, and with $18 million guaranteed.

Mathieu’s signing was arguably the most notable addition New Orleans made this offseason and he was to be a welcome addition to what was already one of the best defenses in the league. One that is currently ranked third in the Sportsnaut NFL defensive rankings. However, it seems like all is not good right now between the 30-year-old and his hometown team.

Related: New Orleans Saints schedule: Kicking off the year with a division rivalry against the Falcons

On Monday, an eagle-eyed fan discovered that Mathieu sent out a very interesting tweet that he then deleted soon after. The scrubbed tweet said, “The only job where youth beats out experience without actually being better.” It was then followed by an even more random post of “HAHAHAHAHAHAHHAHAHAHHA.” Adding to the curious nature of the tweets was the fact that the free safety also removed all references to the team from his Twitter account.

What could Tyran Mathieu’s vague message mean for his relationship with New Orleans Saints?

The obvious answer to Mathieu’s tweets is that he may have been informed he will not be one of the starting safeties for the team’s season opener on Sept. 11. Based on the organization’s depth chart, there isn’t a player on the roster that should be any threat to Mathieu’s spot after signing a major contract in the offseason, and based off of what he has done in the NFL.

The other option, and what the tweets ended up being about, was Mathieu being upset on behath of someone else. Soon after the tweets made deadlines, the former Kansas City Chiefs star Informed Pro Football Talk his tweet was in regards to the Ravens cutting fellow safety Tony Jefferson. 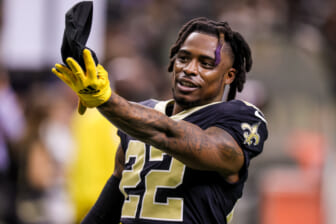 Teams around the league made cuts to their roster on Tuesday to get down to 53 men. Even if Mathieu was just covering up for a post that was about real heat with the Saints, there is absolutely no way they would release him after just signing a sizable deal three months ago. If things did go south it could be an option during the season, but certainly not right now.