The New Orleans Saints addressed plenty of their needs in the 2022 NFL Draft, but they couldn’t land a top safety. So, looking for pieces to contend in 2022, Tyrann Mathieu is back on the team’s radar as a free-agent target.

Mathieu met with the Saints in early April, examining the potential fit with one of the best defenses in the NFL. While the two sides couldn’t agree on terms of a contract, there was mutual interest in revisiting a deal depending on the results from the NFL Draft.

While the Saints added cornerback Alontae Taylor, he was the only defensive back general manager Mickey Loomis drafted. With teams now turning their attention back to free agency, Adam Schefter of ESPN reports the Saints plan to make an ‘aggressive push’ for Mathieu.

There are some NFL teams with concerns regarding the 5-foot-9 defensive back, largely tied to his age and declining production. Mathieu received a 47.4 PFF grade against the run this past season and didn’t do very well as a pass rusher. When he became a free agent, the Kansas City Chiefs moved on from him quickly by signing Justin Reid.

Mathieu, a New Orleans native, could step in as the Saints’ No. 2 safety. He’d work closer to the line of scrimmage with Marcus Maye patrolling deep. Ironically, signing a contract with the Saints would push his former teammate Daniel Sorensen into a bench role with the Saints. 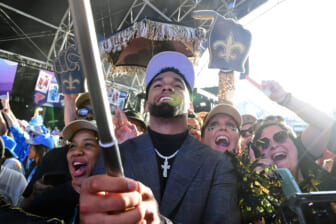 While the Saints will face some competition for Mathieu, potentially from the Los Angeles Rams, a strong offer might be enough to convince the three-time Pro Bowl selection to return home to Louisiana.