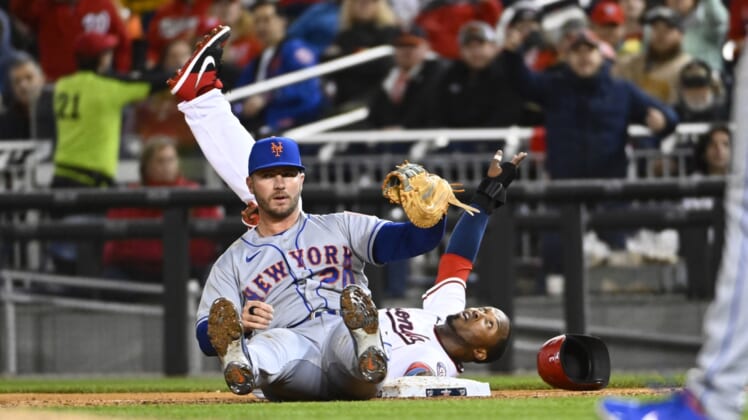 Tylor Megill tossed five shutout innings and the visiting New York Mets opened the Buck Showalter era with a 5-1 win over the Washington Nationals on Thursday.

With ace Jacob deGrom on the injured list and Max Scherzer’s debut with the Mets pushed back to Friday, Megill stepped in and allowed three hits and no walks while striking out six.

Four Mets had two hits each among 12 for the team in Showalter’s managerial debut.

A scary moment occurred in the ninth inning when New York’s Pete Alonso appeared to be hit on the shoulder and face by a Mason Thompson pitch. Alonso went down but quickly got up and left the field under his own power.

Juan Soto homered for the Nationals, and Keibert Ruiz had two hits, including a double.

With runners on first and third with one out in the third inning, Megill struck out Soto and induced a fielder’s choice from Nelson Cruz.

New York had a chance to take the lead in the fourth when Eduardo Escobar doubled with Alonso on first, but Victor Robles threw to shortstop Alcides Escobar, whose relay throw to catcher Ruiz beat Alonso.

The Mets loaded the bases in the fifth on a bunt single, walk and single, and took a 1-0 lead when Corbin hit James McCann with a pitch. After Victor Arano replaced Corbin, Starling Marte’s fielder’s choice grounder made it 2-0.

In the sixth, Alonso singled with one out, Robinson Cano walked with two out, and Mark Canha and Jeff McNeil followed with RBI singles to make it 4-0.
Cano had two hits and scored twice in his return after sitting out 2021 due a suspension for using a banned substance.

Soto pulled Washington within 4-1 when he homered off Trevor May with one out in the sixth. Josh Bell and Ruiz singled with two outs but Lane Thomas grounded out.

New York recouped that run in the seventh inning when J.D. Davis doubled and scored on a single by Francisco Lindor.