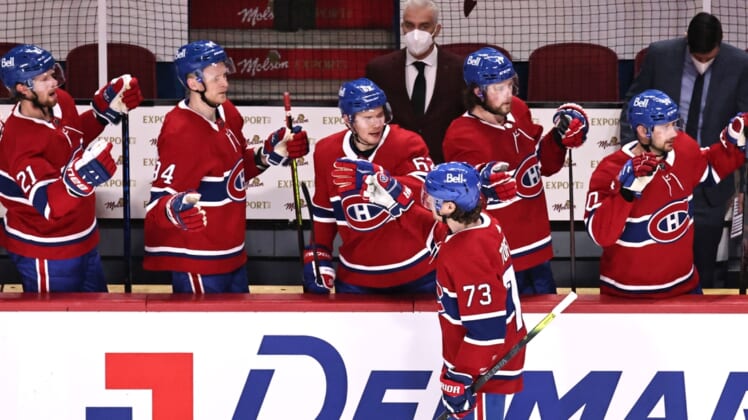 Tyler Toffoli scored two goals and Jake Allen made 28 saves as the Montreal Canadiens collected a 2-1 win over the visiting Calgary Flames on Friday.

With the score tied 1-1 in the third period, Joel Armia won a race to the puck behind the Flames’ net. Armia immediately passed in front to Toffoli, who redirected the puck over the line at 15:45 for his second goal of the game.

Toffoli notched his fifth multi-goal game of the season and ended his personal six-game scoring drought.

The win increased fourth-place Montreal’s lead to six points over fifth-place Calgary in the race for the final North Division playoff berth.

The Flames entered the game on a three-game win streak, including a 4-1 win at Montreal on Wednesday.

Nick Suzuki assisted on both of Toffoli’s goals.

Calgary outshot Montreal by a 29-20 margin, but Allen withstood the pressure. Allen’s night was highlighted by a huge stick save to deny Lindholm on an open-net chance at the 7:45 mark of the second period.

Allen also received some major help from his goalposts. Calgary’s Rasmus Andersson, Johnny Gaudreau and Matthew Tkachuk all hit the iron within a three-minute span late in the second period.

After a scoreless first period, the Canadiens took the lead at 9:32 of the second. Suzuki sent a pass from behind the net to a wide-open Toffoli cruising into the slot, and Toffoli’s well-aimed wrist shot sailed just under the crossbar.

While Lindholm was unlucky to be denied by Allen’s big stick save, the Calgary forward got some good fortune in scoring the equalizer 6:30 into the third period.

After misfiring on a one-timer attempt from the slot, Lindholm sent a backhanded shot from his knees that deflected off Montreal defenseman Ben Chiarot and past Allen.

Chiarot returned to the lineup after missing the previous 15 games due to a broken hand.

Jacob Markstrom stopped 18 shots to lose for the first time in five starts against the Canadiens this season.