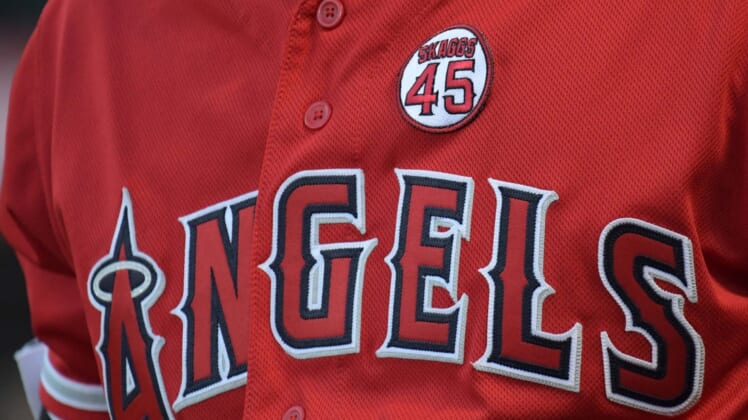 Jul 17, 2019; Anaheim, CA, USA; Detailed view of a memorial patch for Los Angeles Angels pitcher Tyler Skaggs (45) on the jersey of designated hitter Shohei Ohtani (17) at Angel Stadium of Anaheim. Skaggs, 27, died at a hotel in Southlake, Texas, July 1, 2019, where he was found unresponsive prior to a game against the Texas Rangers. Mandatory Credit: Kirby Lee-USA TODAY Sports

The widow and parents of Los Angeles Angels pitcher Tyler Skaggs sued the team and two former employees Tuesday, nearly two years after his death from a drug overdose.

Carli Skaggs’ suit was filed against the team and former communications employees Eric Kay and Tim Mead in Los Angeles County Superior Court, and his parents, Darrell Skaggs and Debbie Hetman, filed their suit in district court in Tarrant County, Texas. In both cases, the plaintiffs accuse the Angels of wrongful death and negligence.

The filings also allege Kay, the team’s former communications director, supplied drugs to Skaggs and at least five other Angels. Mead, who recently resigned as the president of the National Baseball Hall of Fame and Museum, citing family responsibilities, was Kay’s supervisor at the time as team vice president of communications.

“As you might expect, the decision to file these complaints has been a very difficult one for Tyler’s parents and his wife,” said Texas-based lawyer Rusty Hardin, the Skaggs family’s attorney, in a statement. “Nothing will ease the pain and heartache of losing their only child and, for Carli, her husband and soulmate. But they want to get to the bottom of the circumstances surrounding Tyler’s tragic, untimely and completely avoidable death, and to hold the individuals and entities — including the Angels — accountable for the actions that contributed to it.”

Skaggs was 27 when he died July 1, 2019, in his hotel room in Southlake, Texas. The Angels were in town to play the Texas Rangers, and an autopsy later showed he died of aspiration and had a combination of oxycodone, fentanyl and alcohol in his system.

“The Angels owed Tyler Skaggs a duty to provide a safe place to work and play baseball,” Carli Skaggs’ lawsuit said. “The Angels breached their duty when they allowed Kay, a drug addict, complete access to Tyler. The Angels also breached their duty when they allowed Kay to provide Tyler with dangerous illegal drugs. The Angels should have known Kay was dealing drugs to players. Tyler died as a result of the Angels’ breach of their duties.”

The family is seeking jury trials but didn’t specify the amount of damages being sought.

Kay was indicted last October in connection with Skaggs’ death. He pleaded not guilty to federal drug-distribution charges and is scheduled to stand trial in August in U.S. District Court in the Northern District of Texas. He faces 20 years to life in prison if convicted. 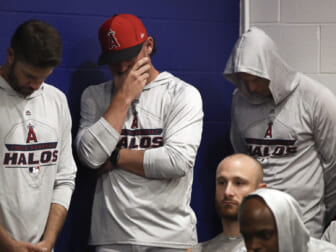 “The Angels did not fire Kay, did not remove Kay from the clubhouse, and did not properly restrict Kay’s access to players such as Tyler,” the Los Angeles lawsuit said. “The Angels likewise failed to stop Tyler’s drug use when they knew or should have known about it.”

Hardin’s statement added: “If the Angels had done a better job of supervising Eric Kay, Tyler would be alive today.”