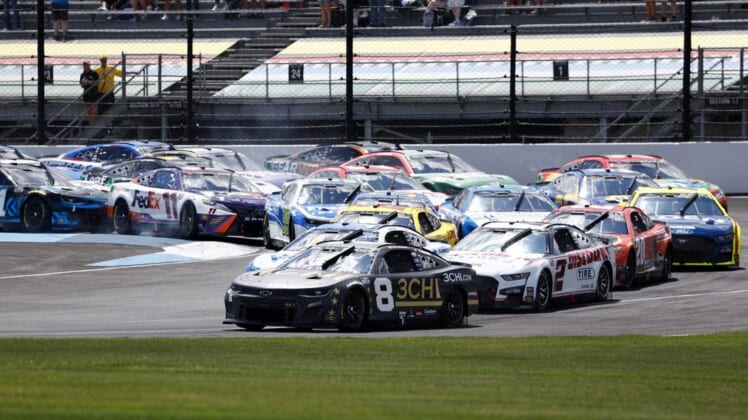 Tyler Reddick mastered a road course for the second time in July, withstanding late restarts to win the Verizon 2002 at the Brickyard on Sunday at Indianapolis.

The last half of the 86-lap race was largely a showcase for Reddick at Indianapolis Motor Speedway’s road course.

Reddick held more than a 3-second lead and appeared to have a clear path to victory. But with four laps to go, a blown tire on Christopher Bell’s car resulted in track debris and a caution. That set the stage for a potential showdown between Reddick and Chase Elliott.

Elliott spun in the first turn of the restart. The ensuing mess resulted in another restart.

This time, Reddick held off Ross Chastain for the victory. However, Chastain was penalized for cutting turn 1, so he’ll move down the list when official results are confirmed.

Reddick claimed his first NASCAR Cup series victory in the first race this month, also on a road circuit as he prevailed at Road America in Elkhart Lake, Wis. Elliott ended up second on that day, but he finished out of the top 15 following Sunday’s late bad luck.

Reddick was the pole-sitter, but Elliott had won two of the past three Cup series events. They were the focus for much of the race.

Reddick grabbed the lead on the 50th lap, but headed to the pits on the next lap, putting Ryan Blaney in front.

But after a series of pit stops, Reddick was back in the lead.

The first caution because of an accident came on the 62nd lap after 2021 series champion Kyle Larson, racing on his 30th birthday, went over the curb and rammed Ty Dillon’s car in what for an instant appeared might be a head-on collision. Still, Dillon exited with significant damage to the car.

The biggest edge in the restart went to Ryan Blaney, who moved to the second-place spot and Bell dropped from second to sixth.

Aric Almirola was the first driver to fall significantly off the lead-lap pace because of a flat tire.

With about a dozen laps remaining, Alex Bowman was black-flagged with his car’s hood coming loose.