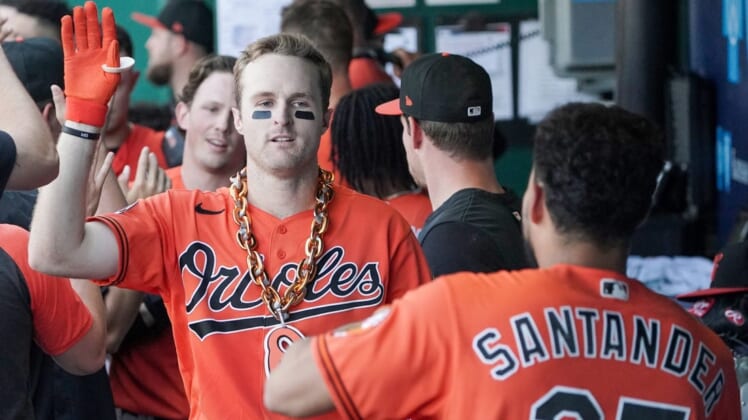 Tyler Nevin hit a three-run home run and Adley Rutschman added two doubles Saturday to lead the Baltimore Orioles to a 6-4 victory over the Royals in Kansas City.

Tyler Wells (3-4) earned the win, allowing three runs on five hits in six innings. He walked two and struck out four. Jorge Lopez earned his eighth save in 10 chances.

Daniel Lynch (2-6) allowed four runs on eight hits in 5 1/3 innings and was pegged with his fifth successive defeat. He walked one and struck out seven, tying a career high.

The Royals got on the board in the first with Whit Merrifield led off with a single and scored on a double by Salvador Perez.

Kansas City added a pair of runs in the fourth. After Michael A. Taylor reached on a bunt single, he scored when Kyle Isbel pulled a triple into the right field corner. Emmanuel Rivera then lined a single past the drawn-in infield, scoring Isbel.

After scoring just three runs in their previous nine games, the Royals have been scoring a lot of early runs recently, plating 22 runs in the first five innings in their last four games, three of which were victories.

But the Orioles finally got untracked in the fifth, scoring when Cedric Mullins singled to right, driving in Jorge Mateo who had walked.

The Orioles took the lead in the sixth. After Ryan Mountcastle beat out an infield hit and Rutschman lined a single to left, Nevin took a 2-1 slider and drove it 425 feet to center for his second home run of the season.

Baltimore added a run in the seventh, when Mullins drew a one-out walk, stole second, reached third on an error and scored on a two-out single by Austin Hays.

Rutschman, the Orioles’ top prospect had gotten off to a slow start since being called up in mid-May, recorded his first career three-hit game and scored Baltimore’s sixth run on a wild pitch in the eighth.

Trailing 6-3, the Royals loaded the bases with no outs in the bottom of the eighth. Taylor hit a sac fly to the warning track in left for one run, but Isbel grounded into a double play to end the threat.