Tyler Herro to play Game 7 for the Miami Heat 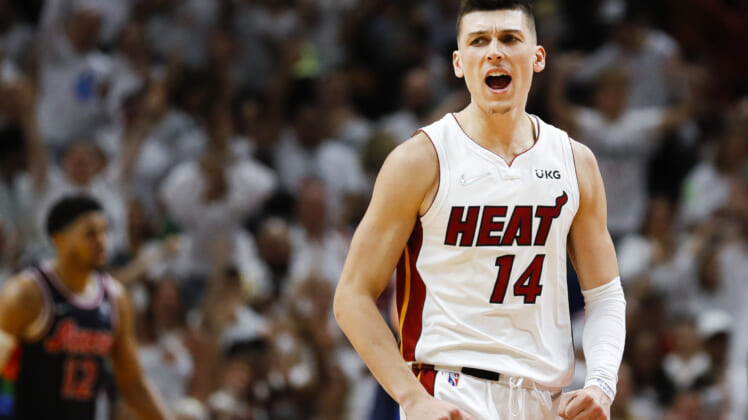 The Miami Heat are about to get a shot in the arm in the form of reigning NBA Sixth Man of the Year Tyler Herro.

The sharpshooting guard has missed each of the past three games due to a groin injury he suffered in Game 3 of their Eastern Conference Finals series against the Boston Celtics.

Heading into the deciding Game 7 in South Beach Sunday evening, Heat head coach Erik Spoelstra announced that Herro has been cleared to play.

“It’s all hands on deck. He passed his testing with the trainers,” Spoelstra on the status of Tyler Herro heading into Game 7.

Even after a season-saving Game 6 win in Boston Friday night, the Heat could certainly use Herro’s scoring ability. They averaged a mere 81 points in the first two games he missed before scoring 111 in Game 6.

What impact will Tyler Herro have on Game 7?

We know Herro has struggled big time during the playoffs after an absolutely brilliant regular season that saw him average 20.7 points, 5.0 rebounds and 4.0 assists on 40% shooting from distance. His numbers are down clear across the board during the postseason.

That three-point percentage is just absolutely staggering given how well Herro has shot the ball from beyond the arc during his career (39%).

With that said, Herro can get on a roll with the best of them. If he knocks down four or five from distance, it would completely change the dynamics of the game.

On the other end of the court, we can fully expect Boston to test Herro’s agility on defense. It’s another major backdrop to this game with the winner set to take on the Western Conference Champion Golden State Warriors in the NBA Finals starting Thursday.