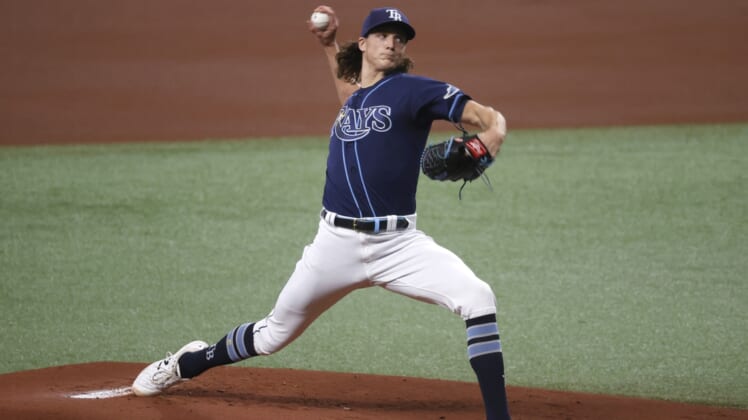 In his third start, Glasnow (1-0) was electric in the 102-pitch showing. He allowed just two hits and one walk and struck out the side in the first, third and sixth innings.

The strikeout total was one short of matching the franchise record shared by Chris Archer and James Shields.

In the seventh inning with two outs against Taylor Hearn (0-1), Adames lobbed a high homer — his second — to left field on a 95-mph fastball on the first pitch.

The Rays moved to 3-1 on their homestand, while the Rangers lost their fourth straight and were blanked for the third time in four games.

The two clubs produced three hits each, and Texas struck out 17 times.

Playing left field for just the second inning of a big-league game, Texas’ Ronald Guzman was injured in the bottom of the first when he avoided a collision with shortstop Isiah Kiner-Falefa on a popup in shallow left.

As Kiner-Falela snared the ball, Guzman dodged him, grimaced and grabbed his right knee. After being examined, he was driven off in a cart, put in a wheelchair and taken to the clubhouse.

Texas starter Dane Dunning used an impressive command of his five pitches to match Glasnow in a 71-pitch outing over four scoreless innings.

He allowed doubles to Austin Meadows in the first and Brett Phillips in the second, plus a pair of walks, but kept the Rays at bay while striking out five.

Eli White — Guzman’s replacement in left field — grounded a hard one-out single up the middle for the Rangers’ first hit in the fifth but was cut down attempting to steal on Glasnow’s ninth whiff.

After Adames’ homer, Cody Reed relieved Glasnow and ended the eighth with a fielder’s choice.

In the ninth, Diego Castillo posted his third save by getting former Rays teammate Nate Lowe looking on an 0-2 pitch with two men on to strike out the side.