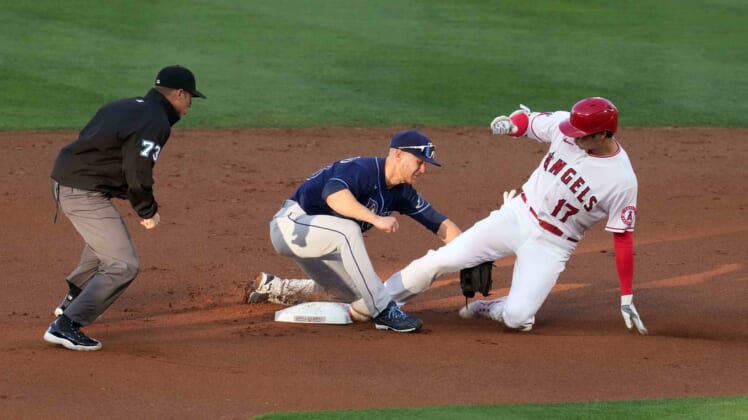 Glasnow threw five scoreless innings, allowing just two hits while striking out seven and cruising with a 5-0 lead. But in the sixth, he surrendered a two-run home run to Shohei Ohtani and solo homer to Anthony Rendon and the lead was reduced to 5-3.

The Rays got some insurance runs in the top of the ninth on Manual Margot’s two-run homer.

Jose Quintana got the start on the mound for the Angels after Ohtani was scratched. Ohtani was hit by a pitch on his right elbow in Sunday’s game, and though he finished the game, Angels manager Joe Maddon called it precautionary to scratch his start.

As the designated hitter, Ohtani went 2 for 4 with a home run, a double and two RBIs.

Quintana started out hot, retiring the side in order in both the first and second innings, striking out five of the six batters he faced. But in the third, the Rays put together five hits, including a two-run single by Mike Brosseau, and RBI singles by Yandy Diaz and Margot for a 4-0 lead.

Quintana yielded a solo homer to Willy Adames in the fourth inning and was finished after 3 2/3 innings, allowing five runs on six hits and one walk. He did strike out a season-best nine.

Rendon had to leave the game in the eighth inning after fouling a ball off his knee.