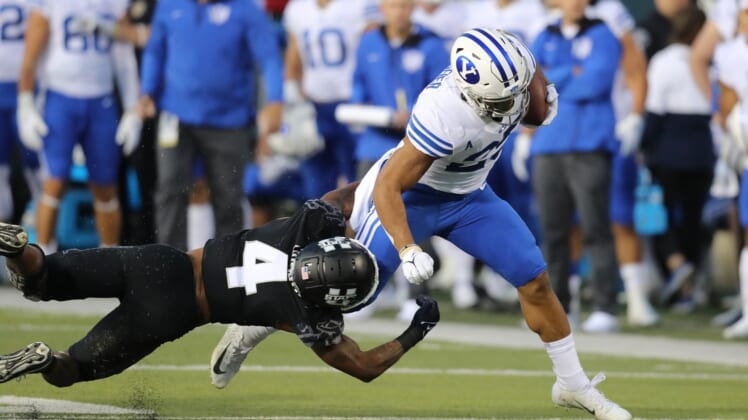 Quarterback Baylor Romney of BYU was 15-for-19 for 187 yards and a touchdown, but he didn’t play in the second half after an apparent head injury at the end of the first half. It was Romney’s second start in a row with Jalen Hall out with an injury, so then the Cougars had Jacob Conover taking snaps.

BYU (5-0) racked up 497 yards of total offense. The Cougars haven’t trailed in any game this season.

Utah State’s Logan Bonner was 21-for-41 for 276 yards and two touchdowns and an interception before exiting with a knee injury in the fourth quarter.

Bonner threw 28 yards to Devin Thompkins for a touchdown with 9:52 remaining, cutting the Aggies’ deficit to 27-20.

On the next play from scrimmage, Allgeier burst 67 yards to the Utah State 1-yard line. Two plays later, Allgeier was in the end zone again.

Allgeier later had a 20-yard run as the Cougars were attempting to run out the clock.

It was a game-long showcase for Allgeier, who had 22 carries, while the BYU defense allowed only seven second-half points.

Allgeier scored the first points on a 22-yard run to complete the team’s opening possession. Jake Oldroyd booted a 49-yard field goal in the first quarter. 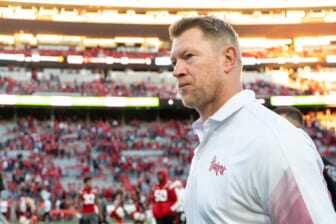 Allgeier tacked on a 59-yard scoring run in the second quarter as the Cougars built a 24-10 lead.

The Aggies (3-2) stayed close, in part due to Connor Coles’ first-half field goals from 52 and 45 yards.

Bonner threw a 21-yard touchdown pass to Justin McGriff in the second quarter, when the teams combined for 24 points.

BYU stopped a Utah State scoring threat in the third quarter by stuffing a fourth-and-1 play.

Utah State dropped to 5-63 all-time in games against Top 25 opponents, though one of the victories came by topping BYU in 2014.