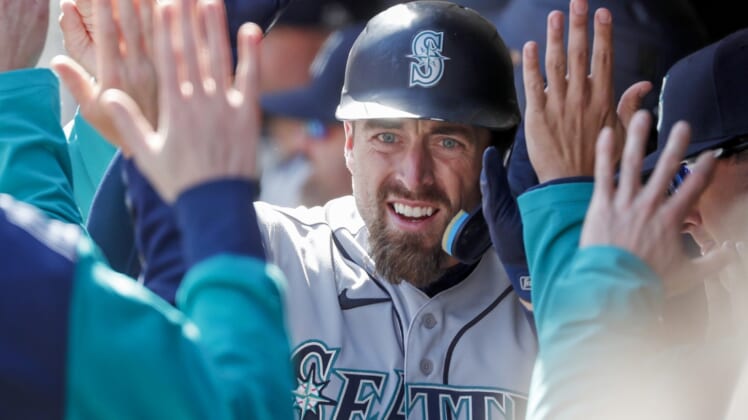 Ty France went 3-for-5 with a double and two RBIs, including a go-ahead single in the ninth inning, to lead the Seattle Mariners to a 4-3 victory over the Minnesota Twins on Saturday afternoon in Minneapolis.

Tom Murphy homered and scored two runs and J.P. Crawford and Murphy each finished with two hits for the Mariners, who have won the first two games of the season-opening four-game series.

Andres Munoz (1-0), despite yielding a two-run go-ahead homer to Byron Buxton in the eighth, picked up the win while Diego Castillo pitched a 1-2-3 ninth with a pair of strikeouts to pick up his first save.

Buxton hit a two-run homer in the bottom of the eighth inning to give the Twins to a 3-2 lead. The 436-foot drive into the third deck in left came off a 100.5 mph fastball thrown by Munoz and drove in Nick Gordon who opened the inning with a walk, snapping a streak of 17 consecutive Twins batters who had been retired.

But the Mariners answered with two runs in the top of the ninth off Duffey. Julio Rodriguez led off with a double into the gap into left-center, his first major league hit. Duffey rebounded to get Crawford to ground out and strike out Murphy but Adam Frazier then lined a double to left to drive in Rodriguez to tie it, 3-3. France followed with a single to right to drive in Frazier with what proved to be the game-winning run.

Minnesota took a 1-0 lead in the first inning when Arraez smashed a Logan Gilbert fastball 372 feet into the bleachers in right for his seventh career home run.

Seattle tied it in the third inning. Crawford led off with a single and Murphy followed with a walk. After Frazier grounded into a 5-3 double play to Arraez that advanced Murphy to second, France doubled off the bottom off the fence in left-center to drive in Murphy.

Murphy gave the Mariners a 2-1 lead in the fifth inning with his first home run of the season, a 423-foot drive off the facing off the second deck in right-center off Twins starter Sonny Gray.