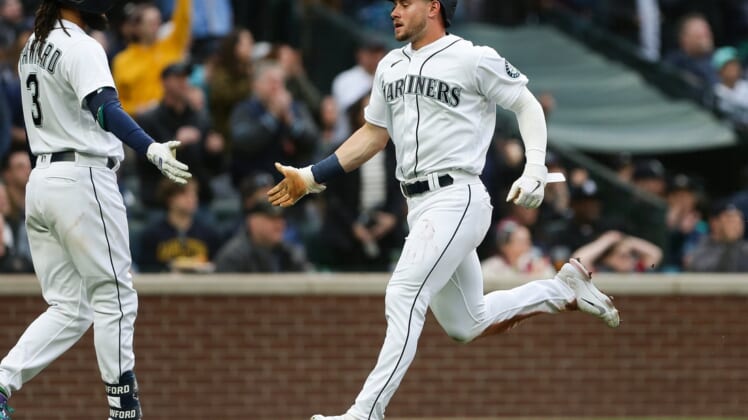 Ty France had his first career five-hit game, including a home run, to lead the host Seattle Mariners to a 13-7 victory over the Kansas City Royals on Saturday night.

The Mariners have won the first two games of the series.

Royals catcher Salvador Perez was hit on the hand by a pitch in the seventh inning and came out of the game.

The Royals’ bullpen saw their scoreless-inning streak snapped at 27 1/3 innings in the sixth. The streak began April 14.

Nicky Lopez led off the first for Kansas City with a walk and Whit Merrifield followed with a double. Andrew Benintendi’s RBI groundout scored Lopez.

France singled up the middle with one out in the bottom of the first. J.P. Crawford followed with a two-run homer.

Back-to-back doubles by Eugenio Suarez and Abraham Toro leading off the third gave the Mariners their fifth run and ended the night for Royals starter Kris Bubic.

Suarez hit a one-out double in the sixth to put the Mariners up 6-4.

After Perez was hit leading off the seventh, Santana homered on the next pitch, tying the game at 6-6. Dozier followed with a double, and he scored on pinch-hitter Edward Olivares’ double.

France’s fourth hit, a two-out single on an 0-2 pitch, scored Rodriguez with the tying run in the seventh.