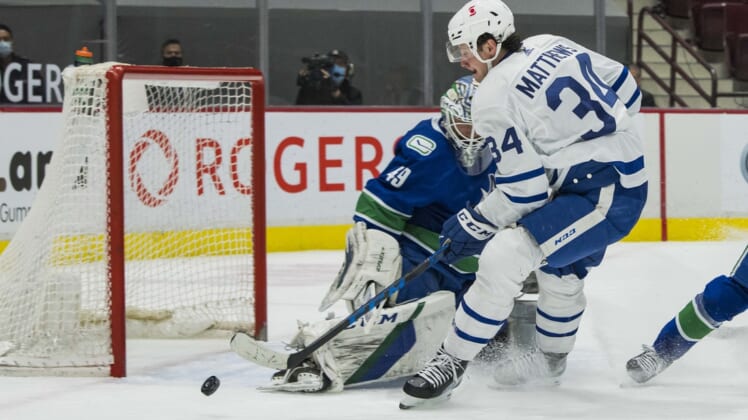 Pearson doubled the lead at 13:36 when he swiped the puck from Alexander Kerfoot and beat goalie David Rittich from a sharp angle in the left faceoff circle, recording his eighth goal of the season.

Brandon Sutter scored into an empty net at 19:24 for his second goal of the game and eighth of the season.

Earlier in the third period, the Canucks’ Nils Hoglander tied the game 3-3 at 6:43 with his ninth goal. Toronto had built a lead on a short-handed tally by Adam Brooks at 3:10, his second goal of the season.

Braden Holtby stopped 37 shots to earn the win for Vancouver, which also got a goal and two assists from Quinn Hughes in its second victory in as many games since returning to action. The Canucks were idle from March 24 through Saturday after 22 players contracted COVID-19.

John Tavares scored twice for the Leafs (28-13-5, 61 points), who maintained a four-point lead in the North Division despite losing their fifth straight game (0-3-2). Rittich finished with 23 saves on 28 shots.

Tavares got Toronto off and running at 16:55 of the first period. William Nylander skated down the left wing around fallen Canucks defenseman Tyler Myers. Nylander had his shot stopped, but he got to the rebound behind the net and fed Tavares at the right post.

Vancouver responded with two quick tallies in just over 4 1/2 minutes of the second period. Sutter retrieved the rebound of Brock Boeser’s deflection off Travis Hamonic’s point blast and shoveled it by Rittich at 5:33, and Hughes followed with his third of the season at 10:08.

Tavares equalized on the power play at 17:14. With Vancouver’s Jalen Chatfield in the box, Tavares got all sorts of space on the left wing and wired a wrister from the faceoff dot over Holtby’s stick for his 16th marker.