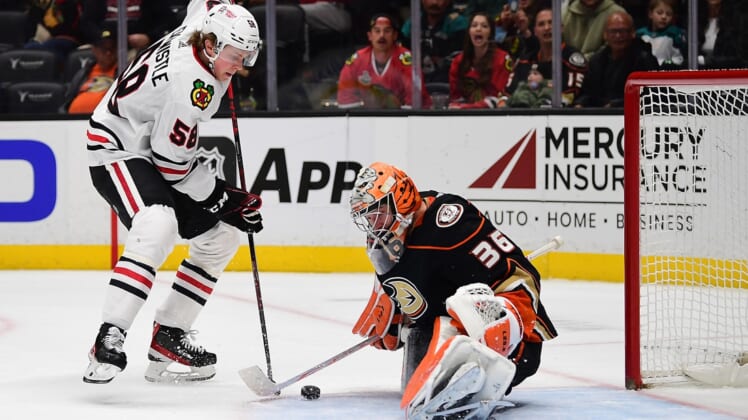 Dylan Strome scored the go-ahead goal with 3:50 remaining and Patrick Kane had a goal and two assists to lead the visiting Chicago Blackhawks to a 4-2 win over the Anaheim Ducks on Wednesday.

Strome, who earlier had an assist, redirected Riley Stillman’s point shot past the glove side of John Gibson for his ninth goal in the past nine games and 18th of the season.

Chicago’s Alex DeBrincat, who sealed the win on an empty-netter with 1:03 to go, had two points. Taylor Raddysh also scored while Kevin Lankinen made 27 saves for the Blackhawks, who snapped a three-game losing streak (0-2-1).

Sam Carrick, playing in his 100th career NHL game, scored both goals for Anaheim, which had its losing streak reach eight games (0-6-2). It was the first two-goal game of Carrick’s career. Gibson finished with 24 saves.

Chicago took a 1-0 lead at the 10:11 mark of the first period with a power-play goal by Raddysh. It was his second tally in three games with the Blackhawks since coming over in a trade with the Tampa Bay Lightning on Friday.

Strome set up the score with a cross-ice pass to Raddysh at the top between the two circles, where he snapped a shot off the crossbar and in for his seventh goal of the season.

Anaheim tied it 2:29 later on Carrick’s first goal in 19 games. Buddy Robinson backhanded a pass from behind the net to Carrick by the left corner of the crease. Carrick then flipped a shot past Lankinen’s glove side.

The Blackhawks made it 2-1 midway through the second period with another power-play goal, this one from Kane. He one-timed a crossing pass from DeBrincat from the right faceoff dot inside the near post for his 20th goal of the season.

Carrick tied it again with 6:32 left in the third period. The rebound of a Trevor Zegras blast came to Adam Henrique, whose pass set up Carrick for his 11th goal of the season.