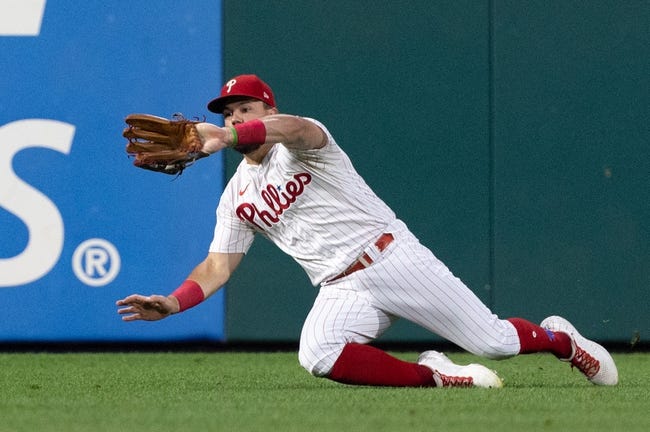 Edmundo Sosa hit a home run, a double and a single and drove in three runs to lift the host Philadelphia Phillies past the Miami Marlins 4-3 on Wednesday.

Jean Segura, who ripped a walk-off RBI single on Tuesday in Philadelphia’s 3-2 victory over Miami, added a solo homer on Wednesday.

Matt Vierling also had two hits for the Phillies (75-61), who will go for a sweep of the three-game series on Thursday.

Phillies starter Bailey Falter (4-3) tossed 5 1/3 innings and allowed seven hits and two runs to go along with three strikeouts and no walks.

Connor Brogdon gave up a solo homer in the ninth but earned his second save in four chances.

Garrett Cooper and JJ Bleday also had two hits apiece for the Marlins, who took their ninth consecutive loss.

Miami starter Trevor Rogers (4-11) gave up five hits and three runs in six solid innings. He struck out eight and walked none.

The Marlins went ahead 1-0 in the first inning when Joey Wendle recorded an RBI groundout.

The Phillies gained a 2-1 advantage in the third when Sosa lofted a two-run homer to left field. It was his second blast of the season and second in as many nights.

Segura launched a solo home run just inside the left field foul pole in the fourth for a 3-1 Phillies lead.

In the fifth, the Marlins closed within 3-2 when Leblanc hit an RBI single to right.

Sosa hit an RBI double in the seventh and the Phillies moved out to a 4-2 lead.

Alec Bohm singled with one out in the eighth and Harper walked. Realmuto struck out and Harper was picked off first with Segura at-bat.

In the ninth, Stallings crushed a leadoff homer to left, cutting the deficit to 4-3. Jerar Encarnacion followed with a single, but Brogdon retired the next three batters to end the game.

Philadelphia designated hitter Bryce Harper appeared to tweak his left side when swinging during his sixth-inning at-bat. Interim manager Rob Thomson came out to check on Harper, who remained in the game and struck out.