Two goals in final 71 seconds get Devils past Stars 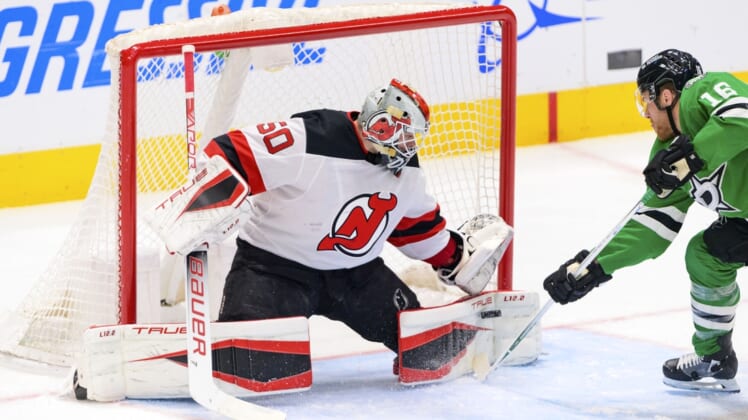 Nico Hischier and Pavel Zacha scored 10 seconds apart in the final 1:11 on Saturday afternoon as the New Jersey Devils stunned the Dallas Stars and delivered a blow to Dallas’ playoff hopes with a 3-1 win.

Hischier gave the Devils the lead with an impressive individual effort, when he took the puck from Kevin Bahl at the left faceoff circle, skated around the net, screeched to a halt to shake Tyler Seguin and then spun into the crease, where his shot bounced off goalie Jake Oettinger and into the net.

With Oettinger looking to get off the ice as soon as possible to get a man advantage following the late New Jersey score, the Stars couldn’t control the puck on the subsequent faceoff. Zacha then scored on a 2-on-1 to cap a three-goal third period for the Devils (25-41-6, 56 points).

Ty Smith scored 4:26 into the final period for the Devils, who snapped a nine-game road losing streak dating back to Feb. 25. Devils goalie Nico Daws made 27 saves.

Ryan Suter scored in the second period for the Stars (40-27-4, 84 points), who entered Saturday with sole possession of the second wild card in the Western Conference, two points ahead of the Vegas Golden Knights. Vegas is scheduled to host the Arizona Coyotes later Saturday night.

The Stars outshot the Devils 21-11 before finally collecting the game’s first goal late in the second, when Dallas scored on a power play generated when Jesper Boqvist was whistled for hooking at the 12:38 mark.

Jamie Benn won a faceoff against Hischier deep in the Devils zone and Vladislav Namestinikov backhanded the puck to Suter, who was stationed just beneath the blue line. With Yegor Sharangovich approaching, Suter shuffled the puck and fired a shot that sailed past the glove of Daws, who was screened as teammate Kevin Bahl tussled for position with Benn, with 6:29 left.

The Devils tied the game when a patient sequence capped an end-to-end rush 4:26 into the third. Fabian Zetterlund passed in the neutral zone to Hischier, who controlled the puck for a few seconds before dropping a backhander to Smith. The defenseman also waited a couple beats for his shooting lane to open before he sent a shot past Oettinger.