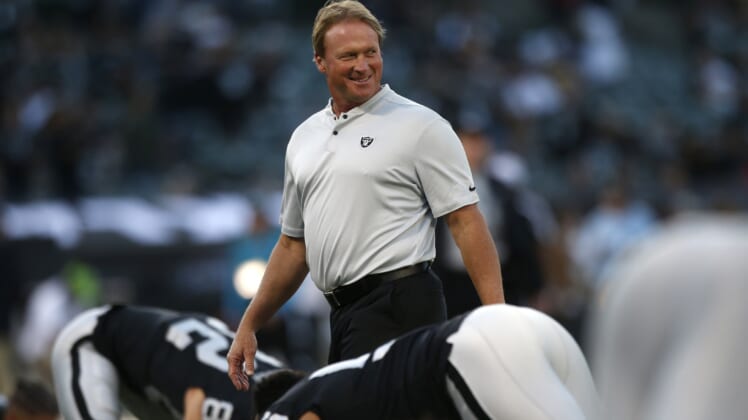 The Oakland Raiders made a not-so-shocking decision to fire their general manager, Reggie McKenzie, on Monday. Following the firing, head coach Jon Gruden addressed the media with his typical golden comments, including this insightful little beauty.

Jon Gruden asked about timing of firing McKenzie: "Well we won a game last night. I went home. Obviously there was a meeting last night and changes have been made … I can't exactly answer why the change was made last night, but changes were made."

He also made it seem like he’s sad to have to go on without McKenzie.

Jon Gruden opens new conference: “I’m really proud of our team yesterday.” Then transitions to Reggie McKenzie. “He’s a good friend of mine. He’s always going to be a Raider. …We’re going to have to build this football team without him.”

Given the reports that McKenzie was all but gone since the moment Gruden was hired, and that Gruden has been assembling his own scouting department outside of McKenzie, this seems awfully disingenuous, to say the least.

With that said, it is no wonder the Twitter world is reacting to Gruden’s puzzling words in royal fashion.

Jon Gruden worked hard to say firing McKenzie wasn't his decision — and that he didn't even know it was coming. But obviously that's a bit of misdirection. This team is Gruden now. All Gruden.

Jon Gruden: “Whoever the general manager is, we’ll show him some tape of Jared Cook.” Impending free agent has 61 catches, 825 yards, six TDs — all career highs in 10th season.

Soon Jon Gruden is gonna be calling the plays on offence and defence, managing the team, snapping the ball to himself, going deep, and covering on special teams all by himself.

Gonna have to check my personal roster for any “good friends” like Jon Gruden.#RaiderNation pic.twitter.com/QvSFb547IH

#Raiders coach Jon Gruden, on firing his “good friend” GM Reggie McKenzie: “We’re going to have to build the football team without him.” Gruden insinuates it was owner Mark Davis who made the call and “changes were made."