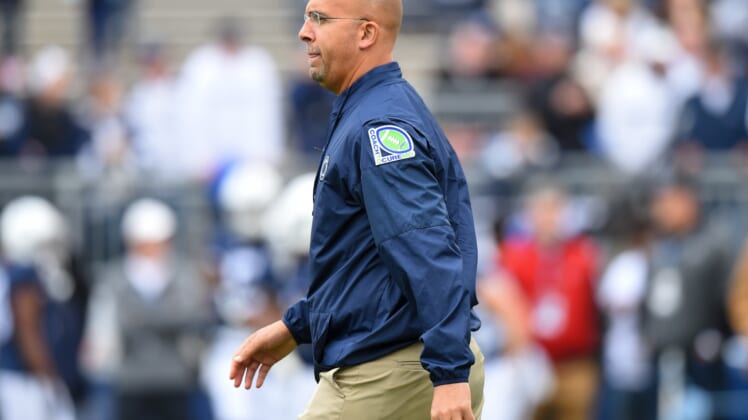 In a Citrus Bowl battle that went from a looming blowout to a nearly improbable comeback, the finger pointing is now in full effect after a brutal late-game coaching sequence by Nittany Lions head coach James Franklin.

Starting quarterback Trace McSorley suffered a foot injury (reportedly a broken foot) during the game and the Nittany Lions seemed out of it.

Trace McSorley has a broken foot and will not return to the game. His Penn State career is over.

As the Kentucky Wildcats rolled to a 27-7 lead near the end of the third quarter, everyone counted the Nittany Lions out.

Somehow, McSorley returned to the field and played well. He engineered two brilliant scoring drives to cut Kentucky’s lead to six in a 27-21 game and Penn State’s defense made stops.

Now McSorley had a chance for a game-winning drive. The senior led the Nittany Lions inside the red zone with a first down at Kentucky’s 17-yard line. After McSorley’s pass on third down fell incomplete, Franklin settled for the field goal facing a six-point deficit with four minutes left in the game.

Huge mistake by Franklin not to go for the win on 4th down. Instead of believing you can make 6 yards, you think you can make a FG, get a quick stop on defense, get another long enough drive to get another FG to tie. Doesn't even make sense.

Now, What do we call James Franklin based on that 4th-and-6 decision, kids?

Good job good effort by James Franklin. Kicking that field goal was incomprehensibly bad. How in the world do guys who make 5 million plus to do this not understand the basic math involved in these decisions.

Franklin’s decision kept the Nittany Lions in a three-point hole and put the pressure on his defense to step up against Kentucky’s star running back Benny Snell Jr.

Sure enough, the Wildcats fed the ball to Snell Jr. and worked to chip away at the clock and to try and get first downs. As the carries and yards added up, the seconds ticked away rapidly. On a drive that started with four minutes and 12 seconds left in the game, Franklin didn’t call his first timeout until there were under two minutes remaining.

James Franklin gonna take those timeouts back to State College with him?

Franklin’s plan backfired. Snell Jr. picked up the first downs when he needed to and drained the clock faster than Franklin could use his timeouts. By the time McSorley took the field, he only had one second left to make a miracle happen.

That miracle never came as McSorley’s career at Penn State came to an end, while many quickly took to Twitter to criticize Franklin’s coaching and the fitting finish to his season.

What I really don't understand about James Franklin is this. He praises Trace McSorley as a winner over and over. Yet in the two biggest games at the two biggest times (Ohio St and UK) he takes the ball out of McSorley's hands, for no real apparent reason

Once again, James Franklin has the best offensive weapon on the field in Trace McSorely and doesn’t allow him to do his job. #stupid #CitrusBowl