Twitter rips Derek Carr over brain fart on fourth down 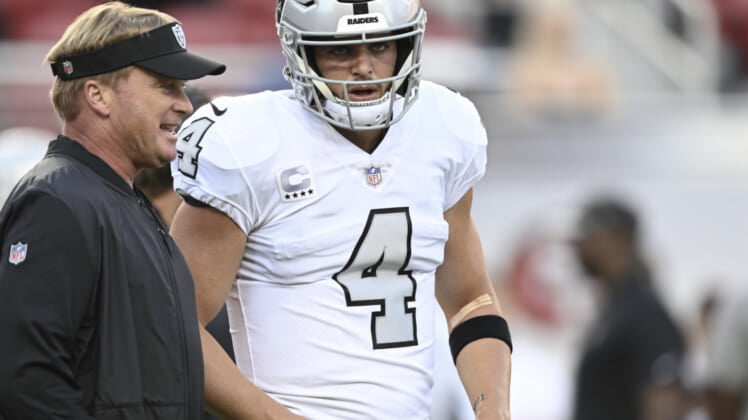 The Oakland Raiders were having a bad game against the Los Angeles Chargers. But a gaffe from Derek Carr took it to a new level.

Trailing 20-6, the Oakland Raiders were inside the red zone and threatening to score. On one play, Carr didn’t like what he saw and threw the ball away into the turf. Unfortunately, said play was a fourth down.

Down 14 in the 4th quarter Derek Carr intentionally threw it into the ground….ON 4TH AND 5 https://t.co/9iF95RMnG4

In that setting, even an interception wouldn’t have been any worse than an incomplete pass. Worse is that Carr seemed to forget that it was fourth down. This was despite the play coming right after a time out.

Twitter had a lot to say about this mistake.

Derek Carr just threw it away on 4th and 5. Huh.

Carr throws the ball away on 4th-and-5. Unreal.

Maybe Carr is in on the tank. Never seen anything like that 4th & 5. I’d believe anything after this game

When Derek Carr gets back to the sideline after throwing it away on 4th down… #LAvsOAK #Raiders pic.twitter.com/1G2ABaQ6D5

Smart move by Derek Carr to throw away that screen and play for fifth down.

I’m serious — I’d start AJ McCarron next week if I were Gruden. That was 100% a benchable offense from Carr

Never thought I’d say it, but Carr is worse than Dalton

It’s been that kind of year in Oakland. Every time we think the Raiders hit rock bottom, something like this happens. We’re equal parts excited and scared to see what will happen next.