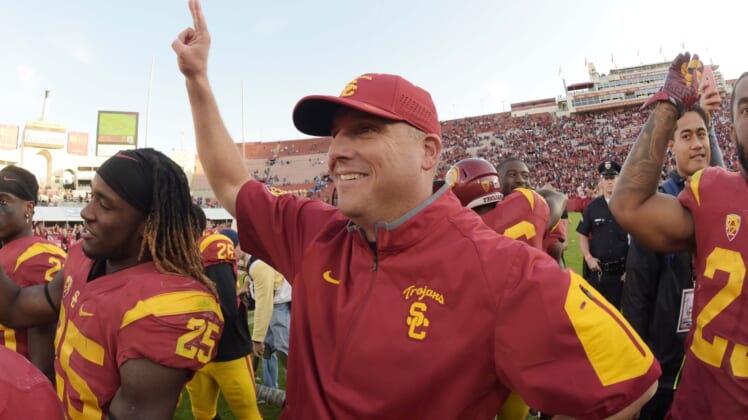 Coming off another tough loss and a five-win season, many expected the USSC Trojans to fire head coach Clay Helton. Instead, USC’s athletic director Lynn Swann announced Helton will return for the 2019 season.

Swann and the university opted to stick by Helton, despite pressure from the fan base to fire him. Though, he did win 11 games in 2017 and won the Rose Bowl in 2016 with the Trojans.

It had almost become a foregone conclusion that Helton would be let go. Rumors started to circulate that USC would target John Harbaugh or James Franklin if it didn’t retain Helton.

Upon learning Helton would return to USC next season, Twitter quickly reacted to the university’s surprising decision.

After all of the sanctions after Pete Carroll, the embarrassments of Lane Kiffin and Steve Sarkisian, it seems like USC is content to just run a clean program with a coach everyone respects… It won't bring back the glory years, but there are worse ways to run a program.

Lol welcome to the treadmill, USC.

Helton the early top candidate for worst hire of this off-season. https://t.co/r4OZVaYJsW

@Lynn88Swann the thing you don’t understand is even the years we did good we got destroyed by Alabama, Ohio state, Notre dame and were never able to compete against teams with equal talent. Helton and his staff is mediocre and that’s not USC standards #sadday

The rest of the PAC-12 when USC announces they’re keeping Clay Helton. pic.twitter.com/ikqBsqNHqX