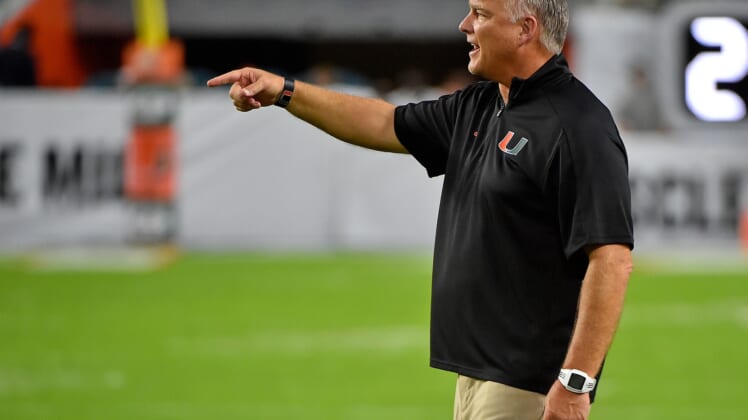 Sunday night’s prime-time clash between Miami and LSU was a game we expected to be a good, old-fashioned slugfest. Based on what transpired on the field before the game, that appeared to be in the cards.

Then the game actually took place.

Instead of a tremendous battle between evenly matched foes, it quickly devolved into a one-sided blowout, with Miami finding itself on the wrong end.

The Hurricanes were a wreck. Penalties, turnovers and bad decisions plagued Mark Richt’s squad, and it all started very early in the game.

The game was essentially over at halftime, as the Tigers held a 27-3 lead. Instead of charging back with a comeback for the ages in the second half, the Canes continued to stink up the joint as LSU dominated on both sides of the ball for most of the third quarter.

A bit of a run by Malik Rosier and Co. in the fourth quarter made the final score more respectable (33-17), but in reality the outcome was never in doubt.

Here’s how Twitter reacted to Miami getting pummeled by LSU.

On @GolicAndWingo last week Miami HC Mark Richt said he was having second thoughts about scheduling LSU week one. He may have been on to something

This is so depressing…. pic.twitter.com/9o4poYeW51

yeah the U is

Beaten
Around by
Cajun
Kids

Sometimes the best healing tool is laughter….. it hurts because it’s true. pic.twitter.com/dFTneItbBq

Miami getting clown stomped By a team coached by A character from the movie Waterboy ??????. #LSUvsMIA

The internet is still undefeated! Not even Bama stands a chance! ??#LSUvsMIA pic.twitter.com/FUkc3bPWLA