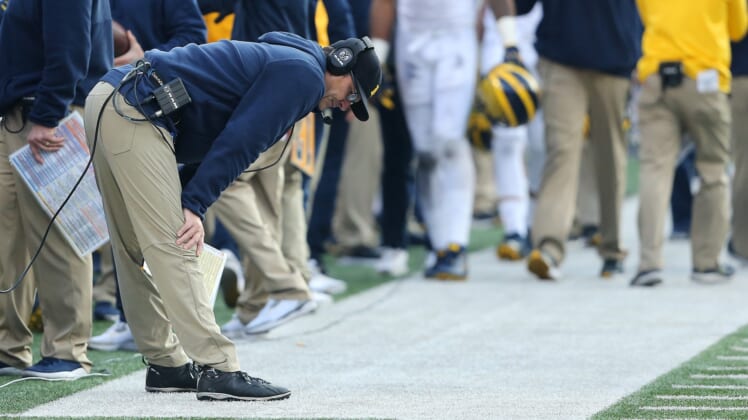 Just a few weeks ago, Harbaugh was roasted after Michigan got spanked by Ohio State, which the Wolverines have never beaten since he took over.

On Saturday, fans had a strong reaction to Harbaugh’s Wolverines once again tanking in a huge game as they got blown out by Florida in the Peach Bowl.

Michigan’s vaunted defense was gashed repeatedly by the Gators. Feleipe Franks had a very strong game, and his incredible touchdown run at the end of the first half really set the tone for what was to come in the latter half.

Lamical Perine iced the game early in the fourth quarter, gashing the Wolverines with a 53-yard touchdown run right up the gut.

The end result was another blowout loss that Michigan fans won’t soon forget.

Harbaugh was lambasted on Twitter for his team’s lackluster showing in the final game of the 2018 season.

Death, taxes and Jim Harbaugh getting spanked in a big game

Harbaugh really about to be 1-3 in bowl games…

When you realize #Harbaugh finally has "his guys" #Fail pic.twitter.com/Blx4htYxmC

Jim Harbaugh is on the verge of going 1-9 as Michigan Head Coach vs teams in the Top 10. ??

Harbaugh is a very consistent coach at Michigan. Even in their best season in years, Harbaugh has consistently had his team not show up for the biggest games.

Though, perhaps we all should have seen this latest meltdown coming. After all, the Peach Bowl is sponsored by Chick-fil-A, and we all know how Jim Harbaugh feels about chicken.