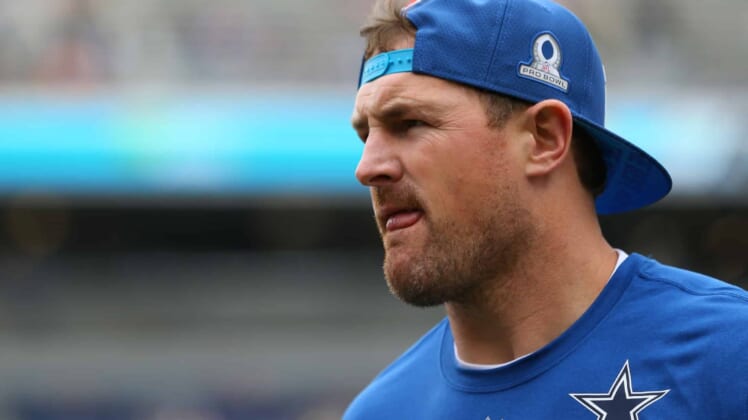 The NFL playoffs are here. It’s Wild Card Weekend. Everyone’s pumped. Including, it would appear, Jason Witten, who showed up for work Saturday wearing a too-small suit that had Twitter buzzing.

I think Jason Witten is wearing a schmedium coat pic.twitter.com/po9pohZUJx

I think Witten needs to go up a jacket size. #WildCardWeekend pic.twitter.com/zK5t4upJI8

That’s not all, folks. The man who’s known for making some pretty interesting observations from the booth did it again before Saturday’s game.

Jason Witten, “JJ Watt has to rush the passer.” I can see where that type of analysis is worth $4 million a year

Then, someone noticed that Witten might have had a line drawn on his head. You be the judge.

Jason Witten really out here with a drawn on hairline brought to you by sharpie. ? pic.twitter.com/ehQKQk4y8S

Overall, fans were just bracing themselves for yet another NFL game, called by Witten, Booger McFarland and Joe Tessitore.

When you turn on Colts-Texans but see Booger & Witten in the booth pic.twitter.com/ajrXcJvmQl

We have to listen to Jason Witten’s commentary today??? ? pic.twitter.com/VTSnPkTkTe