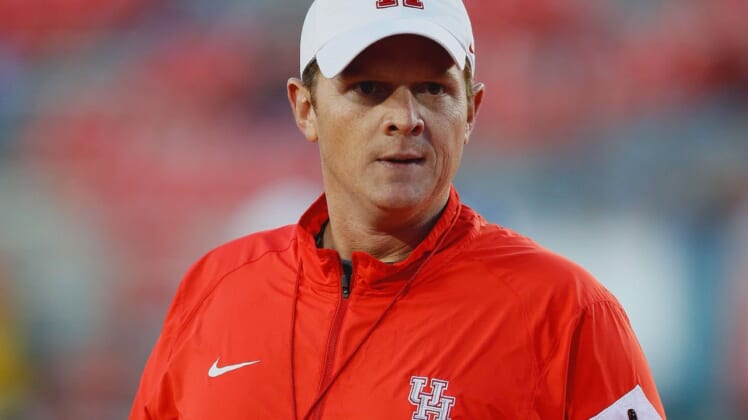 It didn’t take long for Army to establish itself as the dominant team during Saturday’s Armed Forced Bowl against Houston, which started waiving the white flag almost immediately.

The Black Knights got on the board immediately, finishing off an impressive opening drive with a one-yard run by Kelvin Hopkins after shutting Houston down on its first offensive possession.

After forcing another punt the next time the Cougars hit the field, Army got the ball back, and Hopkins went right back to work. This time, he used his wheels to go 76 yards longer, in exceedingly more impressive fashion. On the next offensive play of the game, Army’s defense forced a turnover and scored its second touchdown in 15 seconds (watch here).

Just before halftime, the Black Knights scored their sixth touchdown in the first two quarters to take a 42-7 lead.

Houston really didn’t show up. The game was pretty much over before the opening whistle. Folks had quite a bit to say about that on Twitter.

Houston is furiously Googling the Geneva Conventions after the first half against Army.

maybe this guy was right pic.twitter.com/RQzBja6i7J

Army is going to get charged with war crimes for what they are doing to Houston ??? #ArmedForcesBowl

Checking in on Army vs Houston pic.twitter.com/XPNnkJrjus

It’s like Houston had enough before this bowl game even started. Credit Army, but this is brutal.

Yeah, it’s been really bad. And apparently, this feeling of defeat was permeating the atmosphere well before Saturday’s bowl game.

As I mentioned in today's bowl advance, there is ABSOLUTELY no buzz around the Houston football program. Since climbing to No. 6 early in 2016 season, Cougars are 19-13 with two lower-tier bowl losses.