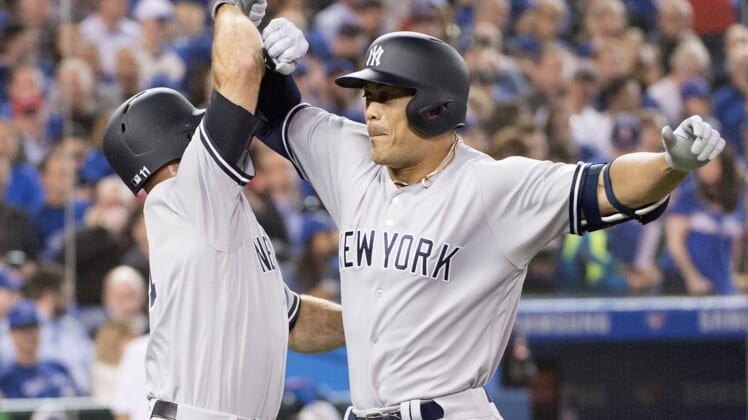 Giancarlo Stanton homered in his first at-bat with the New York Yankees — a real laser shot, too. It didn’t take too long for him to get home run No. 2 with his new team.

He did it again. Giancarlo Stanton, his 2nd HR on Opening Day for the Yankees. 3-for-5, 2 HR, 3 R, 4 RBI. Not bad. #PinstripePride pic.twitter.com/NIyoN4kKjp

ANOTHER home run for Giancarlo. pic.twitter.com/TYKipQIjsv

Yeah, Stanton just hit another homer. It went 434 feet. He has driven in four runs. I think there will be a lot of words written about him for tomorrow's paper. #Yankees

Of course, some people couldn’t help but make a connection between Stanton and his old team — specifically his old team’s owner.

I just want to thank Derek Jeter for remaining loyal to the Yankees and making this all possible.

Well, that was predictable. These comparisons were, too.

At this pace Stanton breaks Bonds’ record by May Day.

Of course, not all of the tweets were positive.

Already sick of Stanton on the Yankees and its game 1

Stanton hit 2 HRs and the Redsox blew a 4 run lead. I hate my life pic.twitter.com/j0jgVnoFVz

Cheer up, buddy. There’s 161 more to go. Though, to be fair, if those games go like the opener, Yankees fans are going to be quite thrilled.

It was good day for New York’s prized offseason acquisition.