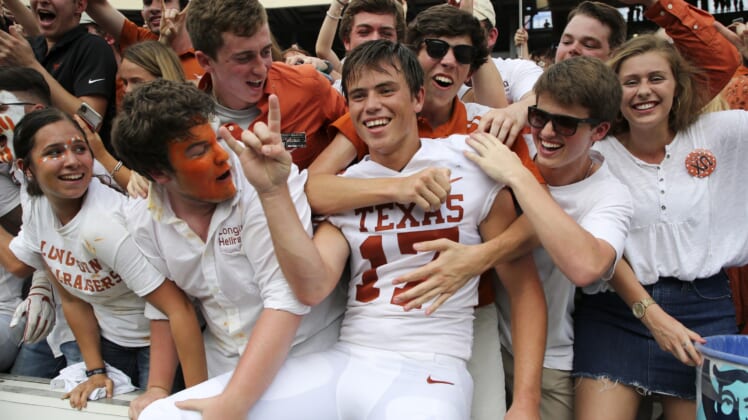 For a minute there, it seemed safe to officially declare that Texas is back after watching Sam Ehlinger and the Longhorns defense dismantle the Oklahoma Sooners on Saturday.

Texas had been dominating the Red River Shootout, starting out early with a trick-play touchdown and an interception of Kyler Murray, who was having a rough game (thanks to plays like this).

They went up by three touchdowns after three quarters, and it looked like the game was over.

Then Murray and the Sooners flipped a switch in the fourth quarter, scoring three touchdowns to tie the game up at 45-45 with a couple minutes left on the clock.

Ehlinger and the Longhorns rallied and were aided by a couple of bad Sooners penalties, moving into field goal range.

With the game on the line, freshman kicker Cameron Dicker (now known for the rest of time as “Dicker the kicker”) stepped up to kick the biggest field goal of his young life. And he nailed the 40-yarder right through the uprights.

Murray and the Longhorns had nine seconds to try and do something but ultimately fell short.