Twitter reacts to brutal, awful end of ‘The Match’ 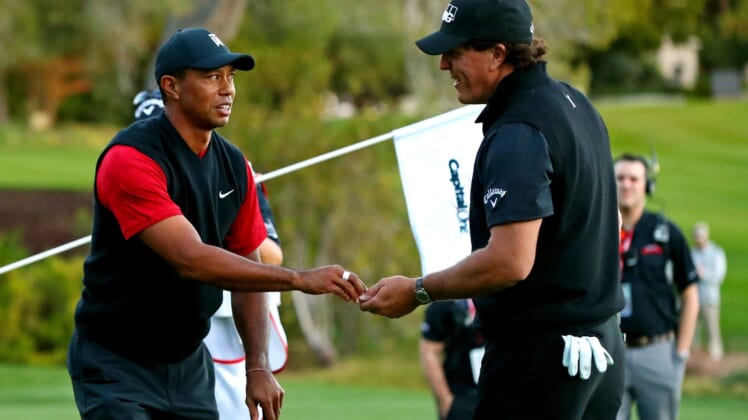 When two of the best golfers scheduled a head-to-head match, people could have only imagined the finish we saw on Friday between Tiger Woods and Phil Mickelson.

“The Match” went back-and-forth for much of the day, though Woods held the lead just once in the first 18 holes. It remained close throughout with neither golfer having more than a one-stroke lead.

It moved to the 18th hole with a chance for one of the two to emerge victorious with another memorable victory and the recipient of $9 million. Woods drilled a 5-foot birdie putt then picked up Mickelson’s coin and gave him the birdie to send it to the 19th hole.

Woods pulled his tee shot on the 19th hole and sent it close to the trees, while Mickelson just barely did better placing it in the rough and taking the early advantage. Mickelson couldn’t take advantage as his next shot burrowed into the bunker, while Woods quickly recovered.

Mickelson’s setback put Woods in position to win it with an 8-foot birdie, but he couldn’t sink it and the match moved on to the 93-yard chip contest for the 20th hole. Mickelson missed a birdie to win it, sending it to a second round of the chip contest.

After seeing both golfers choke away chances to put it away, the chip contest provided much of the same. Despite Woods missing two shots long, Mickelson couldn’t sink a match-winning birdie twice.

The third round finally brought an end to the madness. After Woods missed a birdie, the third chance to win proved to be the charm as Mickelson sank the birdie to win the $9 million.

Following the back-and-forth match that came down to the 20th hole, Twitter reacted to Mickelson finally, mercifully winning the match.

#TheMatch the winner is @PhilMickelson Not pretty at times but in the end he finally made a putt! #TigerVSPhil #TheMatch

Mickelson birdies the makeshift playoff hole on the third try after take can't make his birdie effort. $9 million to Lefty.

Jesus, I can’t believe spent my whole day off on that. #TheMatch

That was so boring it turned interesting then disappointing #TheMatch

I went in wanting Tiger to win but I didn't care at the end. I was just glad it was over. Never do this again. #TheMatch

They should’ve played the @EuropeanTour 14 club challenge as the playoff. Its becoming this much of a joke. #TheMatch