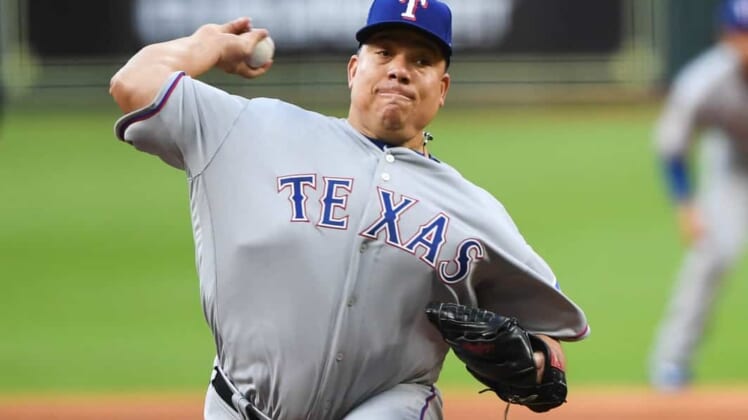 On Sunday night, Bartolo Colon had the baseball world on the edge of its seat. The 44-year-old pitcher, whose career was thought to be over as recently as last year, had a perfect game going through seven innings.

By the end of the sixth inning, the Astros were doing everything they could to throw a monkey wrench into things.

Looks like Bartolo is throwing a perfect game. Would be a real shame if it was jinxed and broken up soon. Real shame.

People started to believe Colon really could pull off the miracle when he completed his seventh inning without giving up a hit, the perfect game still intact. This is when all hell started breaking loose on social media as people tried to wrap their heads around what was happening.

Me: "Bartolo Colon is pitching a perfect game through six."

Banister will be nervous about Bartolo’s pitch count soon. Anything more than 300 and he’ll risk not pitching in his 50s.

In the bottom of the eighth inning, Carlos Correa drew a walk on five pitches, becoming the first person to get on base against Colon in the game.

First batter I watched. My bad.

However, the no-no was still alive.

Then, right fielder Josh Reddick blew that up, doubling into right field on an 0-2 count to put the no-hitter to bed and crush almost all our hopes.

And just like that the no-hitter is gone as well as Josh Reddick doubles to right. pic.twitter.com/2TLD07XtMN

We can't have nice things.

However, the Astros were pleased as punch.

One batter later, Yuli Guriel drove in Correa with a sacrifice fly, and not only was the no-hitter gone, but so also was the lead. Houston tied the game up 1-1, and in the process, Colon was pulled for reliever Alex Claudio, who retired the side, the game tied up at 1-1.

The perfect game and no-hitter bid by Colon was pretty darn amazing, regardless. He’s not supposed to be able to do the stuff he does, yet Big Sexy always manages to surprise us now and again.

What a night, #BigSexy! pic.twitter.com/xoUOD82JpM

Hopefully, this wasn’t the last thrill Colon gives his fans.