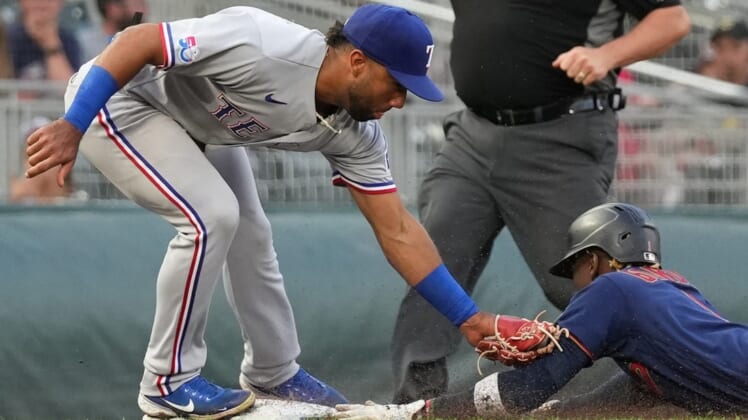 Corey Seager delivered a tiebreaking RBI single two innings after he was involved in a triple play for the Texas Rangers, who edged the Minnesota Twins 2-1 on Monday night in Minneapolis.

Adolis Garcia homered in the fifth for the Rangers, who won the final three games of the four-game series and are 5-3 under interim manager Tony Beasley. The Twins, who turned their second triple play of the season, fell two games behind the idle first-place Cleveland Guardians in the American League Central.

Twins starter Sonny Gray retired the first nine batters he faced before the triple play bailed him out of trouble in the fourth. Marcus Semien led off the inning with a single and Seager followed by drawing a four-pitch walk.

Nathaniel Lowe then lined out to first baseman Jose Miranda, who beat Seager to the bag before firing high to shortstop Carlos Correa, who leaped for the throw and landed on the bag before Semien could get back.

The Twins seized the momentum from Monday’s triple play in the fourth inning, when Gio Urshela led off with a triple against Cole Ragans and scored on Nick Gordon’s double.

The Rangers began coming back in the top of the fifth, as Garcia hit a leadoff homer. Texas built the go-ahead run in the sixth when Brad Miller and Ezequiel Duran opened the frame with singles. Miller went to third on a flyout by Semien before scoring on Seager’s single.

A.J. Alexy (1-0), the second of five Rangers pitchers, earned the win by allowing one hit over 2 1/3 innings of relief. Brett Martin and Jose Leclerc combined for 1 2/3 innings of one-hit ball before Matt Moore earned his third save with a perfect ninth.

Ragans gave up one run on five hits and two walks while striking out two over four innings.

Gray (7-4) took the tough-luck loss after allowing the two runs on five hits and one walk while striking out six over six innings.