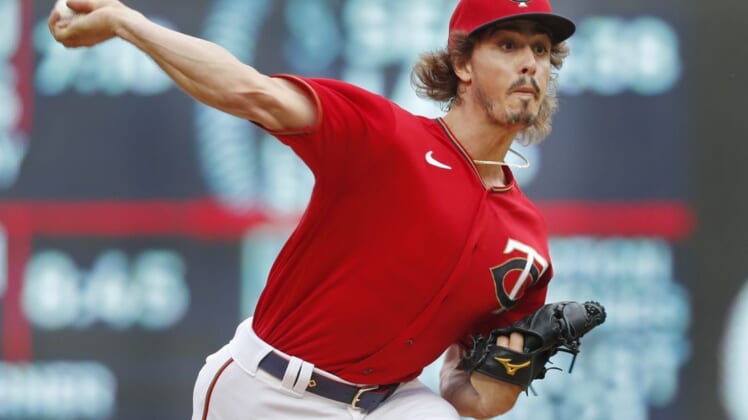 After having their four-game winning streak snapped with a 4-3 loss in 10 innings to the Texas Rangers on Saturday, the Minnesota Twins will turn to the starting pitcher who helped start that streak.

Rookie right-hander Joe Ryan (9-5, 3.92 ERA) will make his first career start against Texas on Sunday in the game in Minneapolis. The Rangers will counter with right-hander Kohei Arihara (0-1, 4.76), who will make just his second start of the season.

Ryan, who leads the Twins in wins this season, helped push Minnesota to a 4-2 victory over Kansas City in his last start on Monday, allowing two runs on six hits over 5 1/3 innings while striking out six.

Arihara, who is 2-4 with a 6.64 ERA in 10 big league starts, has never faced the Twins. He made his first start of 2022 on Tuesday, taking the loss in a 5-1 setback to Oakland by allowing three runs on eight hits over 5 2/3 innings. He walked three and struck out six.

Texas, which leads the majors with 25 one-run losses, picked up just its eighth one-run win on Saturday to even their four-game series with Minnesota at one win apiece.

The Rangers’ Corey Seager led off the 10th with a single down the right-field line to drive in designated runner Marcus Semien from second. Mark Mathias later drove in Seager with what proved to be the winning run.

Nathaniel Lowe also singled in the 10th, his fourth hit of the game. Jonathan Hernandez picked up the win while throwing two innings for the first time this season.

Minnesota had rallied to tie it, 2-2, in the eighth inning on Jose Miranda’s two-out single, driving in Max Kepler from first thanks in part to Semien mishandling the relay throw from Leody Taveras.

“At the end of the day, we got the win,” said Seager, who had a throwing error that helped lead to the Twins’ first run. “It’s hard to win a major league game. We made our mistakes, but we kept battling and got back in the game and ended up winning.”

The Rangers improved to 3-3, including 2-1 in one-run games, under interim manager Tony Beasley, who took over when Chris Woodward was fired on Monday.

“We find our way in one-run games; somehow, we’ve just have to win them,” Beasley told MLB.com afterward. “That’s the thing. That’s how you win the game, by scoring just one more run than the opposition. So I don’t care if they’re one-run games, as long as we come out on top. If we can learn how to win those close, one-run games, that’s what championship teams do. They find ways to win those games.”

The Twins won the series opener 2-1 on Friday thanks to back-to-back homers in the first inning by Luis Arraez and Jose Miranda and a strong bullpen performance. However, that helped camouflage an 0-for-5 performance with runners in scoring position. Minnesota followed that with a 1-for-10 effort in that category on Saturday.

“We had a tough time stringing together the types of at-bats that we needed,” Twins manager Rocco Baldelli said. “We went in with a good game plan. We didn’t quite execute the way we needed to. We didn’t barrel-up enough balls.”