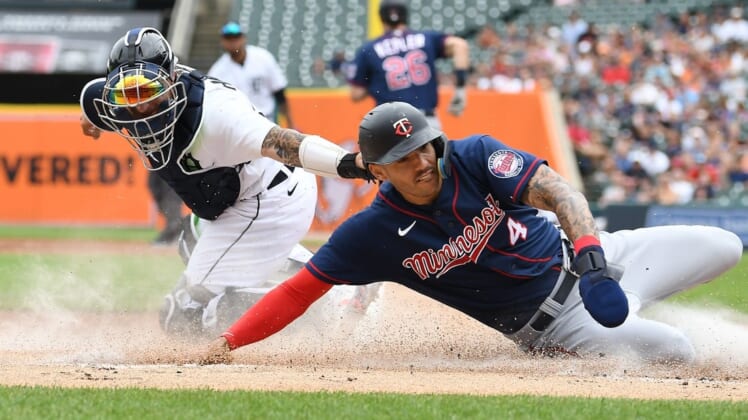 Sonny Gray struck out seven batters and allowed one run in six innings to help lead the Minnesota Twins to a 9-1 road win over the Detroit Tigers on Sunday.

Jose Miranda went 3-for-4 with two RBIs to lead the offense for the Twins, who swept the brief two-game series between the teams. Gray (5-3) walked one and threw 84 pitches, 55 for strikes.

Eric Haase had two of Detroit’s three hits and drove in the Tigers’ lone run.

Tigers shortstop Javier Baez left the game with a left arm contusion after being hit by a pitch from Gray in the fourth inning.

The Twins jumped all over Tigers starter Rony Garcia (3-3) in the first, scoring three runs on two hits and an error to take a 3-0 lead.

Max Kepler scored Carlos Correa from third base on a fielder’s choice groundout. Jorge Polanco scored to make it 2-0 after an error by Tigers first baseman Harold Castro. Garcia then hit Miranda with the bases loaded to plate the third run of the inning.

Garcia ended up throwing 34 pitches in the first inning.

Reliever Angel De Jesus pitched 2 1/3 innings of hitless relief to help keep the Tigers in it.

Detroit cut Minnesota’s lead to 3-1 in the fourth inning on an RBI single by Haase, but Minnesota gained separation with three runs in the seventh to take a 6-1 lead.

Minnesota added two more in the eighth inning on a two-run double by Gary Sanchez to take an 8-1 lead, and then tacked on another run in the ninth on Miranda’s RBI single.

Detroit, which has scored the fewest runs of any team in the league, has lost 11 of its last 13 games.