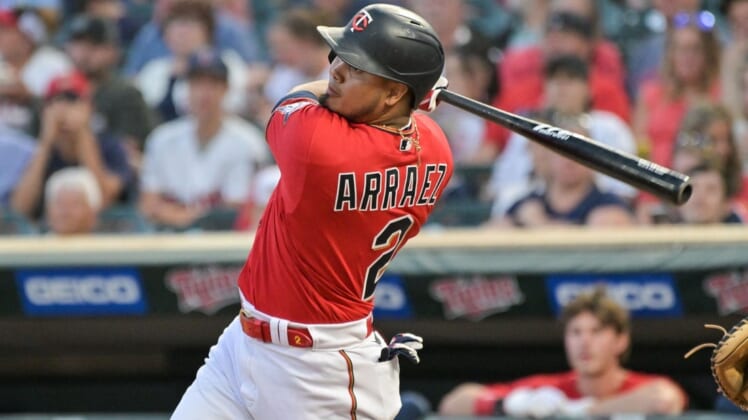 The Minnesota Twins didn’t need one of the standouts in the All-Star Game to record a victory in their first game since the break. They’ll look for a two-game sweep against the host Detroit Tigers on Sunday.

Outfielder Byron Buxton, who homered for the American League on Tuesday, received a platelet-rich plasma injection in his right knee on Wednesday. Buxton, who has been battling knee tendinitis much of the season, is expected to sit out on Sunday but should return early next week.

“We wanted to take advantage of some of those (off) days,” manager Rocco Baldelli said. “We also wanted him to be able to also play in that All-Star Game, too, which is a very, very special moment for any player, especially your first.”

The Twins cruised to an 8-4 win without him on Saturday. They had 11 hits, including three from fellow first-time All-Star Luis Arraez.

“A lot of good ABs, and when you win a lot of at-bats, you’ve got a good chance of winning the game, and that’s what I think happened,” Baldelli said.

Earlier, Gray delivered his best start of the season against the Tigers. On May 24, he held them scoreless in seven innings while recording a season-high 10 strikeouts.

In seven career appearances against Detroit, six of them as a starter, Gray is 3-1 with a 2.63 ERA.

Rony Garcia (3-2, 4.28 ERA) will start the second game of the abbreviated series for Detroit. Garcia will be making his first appearance since being placed on the 15-day injured list, retroactive to June 30, with right shoulder soreness.

Garcia will take the starting spot vacated by Beau Brieske, who went on the injured list this week with right forearm soreness. Drew Hutchison, who was originally listed as Sunday’s starter, will instead pitch the opener of a three-game series against San Diego on Monday.

Garcia made his most recent start on June 29, when he held host San Francisco to one run in five innings.

He faced Minnesota twice within a one-week span in late May. He gave up two runs in four innings the first time around, then was battered for six runs in five innings in the rematch. Overall, he has made five career appearances against Minnesota, going 0-1 with a 9.26 ERA. The other three appearances were as a reliever.

The Tigers gave up three runs in the seventh inning and three more in the eighth on Saturday, in part because of some sloppy defense. They committed two errors, one in each inning, and only half of Minnesota’s runs were earned.

Detroit was down 8-1 before scoring three runs in the eighth.

“I don’t like the way the game went at all,” manager A.J. Hinch said. “I’m glad we hung in there … and they had to use some (bullpen), but we didn’t do great. The middle part of the game I thought we handled fine. It felt really good once we cut the lead to 2-1, and then things fell apart.”