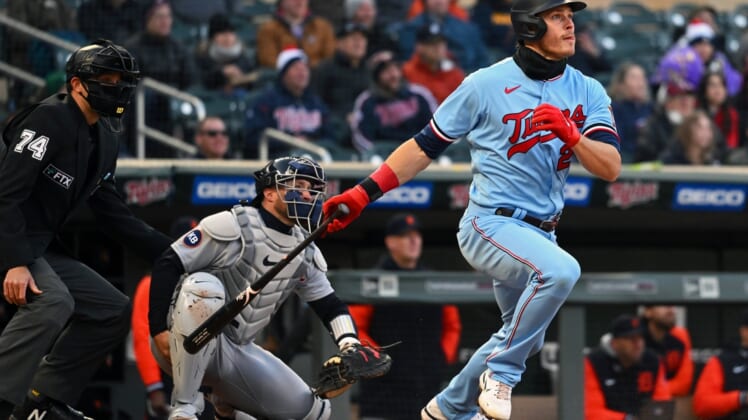 Miguel Sano ripped a single into right field with two runners on base in the bottom of the ninth inning, and a throwing error moments later allowed the Minnesota Twins to prevail 5-4 over the Detroit Tigers in a wild finish Tuesday night in Minneapolis.

Max Kepler went 2-for-4 with a double, a home run and three RBIs to lead the Twins at the plate. Urshela added a pair of hits as Minnesota won its season-high fifth game in a row.

Javier Baez went 2-for-3 with a double, a homer and four RBIs for the Tigers. Detroit dropped its third straight game.

Twins right-hander Griffin Jax (1-0) picked up the win with a scoreless inning of relief.

Tigers right-hander Gregory Soto (1-1) took the loss. He gave up back-to-back walks to start the ninth inning and allowed two unearned runs in one-third of an inning.

The Twins opened the scoring in the bottom of the second. Kyle Garlick drew a leadoff walk, advanced to second base on a single by Urshela and came home to score on Kepler’s double to deep right field.

Kepler increased the Twins’ lead to 3-0 in the fourth with a two-run blast. He pulled an 83 mph changeup over the wall in right field for his second homer of the season.

The Tigers trimmed the deficit to 3-1 in the sixth. Baez drove a double to deep right field to drive in Derek Hill, who led off the inning with a bunt single.

In the eighth, Twins left-hander Caleb Thielbar put runners on first and second base with one out with Baez coming to the plate. Pagan replaced Thielbar and quickly gave up a 415-foot, three-run shot to center field, which marked Baez’s second homer of the season.

Before the game, the Tigers reinstated left-hander Andrew Chafin from the 10-day injured list.